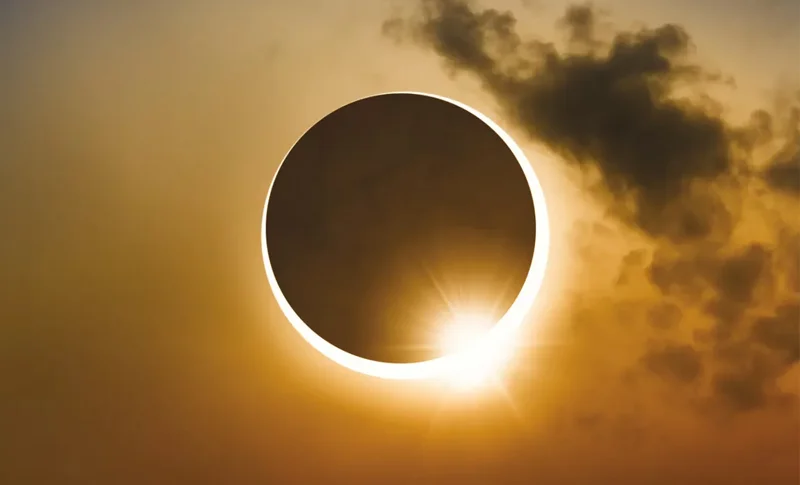 Solar eclipse is caused when Moon passes between Sun and Earth, blocking the light and spreading darkness for a while. While this temporary event will last only a few hours, its astrological impact would be felt for a long while. Whether its influence is positive for you or not, it depends upon how Sun and Moon are placed in your horoscope.  A solar eclipse occurs when Sun and Moon are conjunct in a house, and fall in Rahu-Ketu axis. There are three types of solar eclipses - partial, annular and total. Total or Full solar eclipse occurs when Sun is fully covered by the Moon and it can occur only when Moon is close to perigee, the point where its orbit is closest to Earth.

Locations where Solar Eclipse will be visible

On 21st August 2017, there’s one of the most potent solar eclipses of our time taking place. As per IST, eclipse will take place from 21st August 2017 at 21:16 hours to 02:34 hours on 22nd August 2017. While the eclipse is not visible in India, its path goes from coast to coast in USA, from Oregon on one side to South Caroline on the other. The eclipse will also be visible in some parts of North Western Europe along with Iceland, Scotland and Ireland where the beginning of the eclipse can be observed. Apart from these, it will be visible in London between 19:40 hours to 20:10 hours. While eclipse will have a strong impact on all of us, it will affect those places more potently where it is visible.

This Solar Eclipse takes place in the sign of Leo, the Sun’s own sign, which makes it even more significant. This would be the time when you will need to be very cautious in how you use your powers. Whether you are a generous leader or an ego-tripping fanatic will make all the difference. The key lies in how you use your influence, whether to empower or to overpower. With Moon casting its shadow over Sun, the symbolic meaning that can be inferred is that you need to confront your innermost emotions now and only then will you be enlightened.


An interesting observation about the coming eclipse is that 5 major planets (Sun, Moon, Rahu, Mars, and Mercury) will be in close proximity within 20° and will also be under Ketu’s aspect. This planetary amalgamation is likely to make the full solar eclipse even more potent.

On a global level, the major effect will be seen on northern USA. Since the eclipse is occurring in Leo, Sun’s own sign, some political disorder is expected. President Donald Trump, being a Leo ascendant might experience major resistance and health issues in the wake of the eclipse. His decision-making ability may also suffer a setback.

If you are born under Leo Moon or ascendant, be ready to experience some major transformations in your life, especially concerning relationships and health.

Since Mars is involved in the cluster of planets, this eclipse is unlikely to fare well for Aries and Scorpio Moon signs. Your valor and self-esteem will suffer and you may feel pressured in fulfilling promises.

In Hindu mythology, full solar eclipse is said to be inauspicious, and it is believed that any new project should be avoided during this time. In fact, the time band of eclipse is not auspicious for new beginnings, because for any new ventures to be successful, you need “light”, which is not present during an eclipse as Rahu and Ketu gobble up the light. Eclipses are rather great times to meditate and spend time indoors. This is what gave way to eclipses being considered a negative omen and also why people do not move out of their house on the day of the eclipse.

The idea is that one should not kick off anything new like a deal or a contract on eclipse or the days following or preceding it. It is also important to consider whether the eclipse is even visible where you live or not. At the same time, Indian astrologers come up with auspicious timing (called Muhurtha) coinciding with Solar Eclipses to start off a new venture. A Bollywood movie - Dilwale Dulhaniya Le Jayenge was released on the day of the Eclipse and it went on to be a Bollywood blockbuster. This Solar Eclipse is taking place close to a clustering of 4 planets in the sign of Leo, aspected by Saturn which in itself can throw up some great opportunities your way while issuing cautious approach.