How the celestial connection between Modi & Obama will help India - the Astrology perspective! 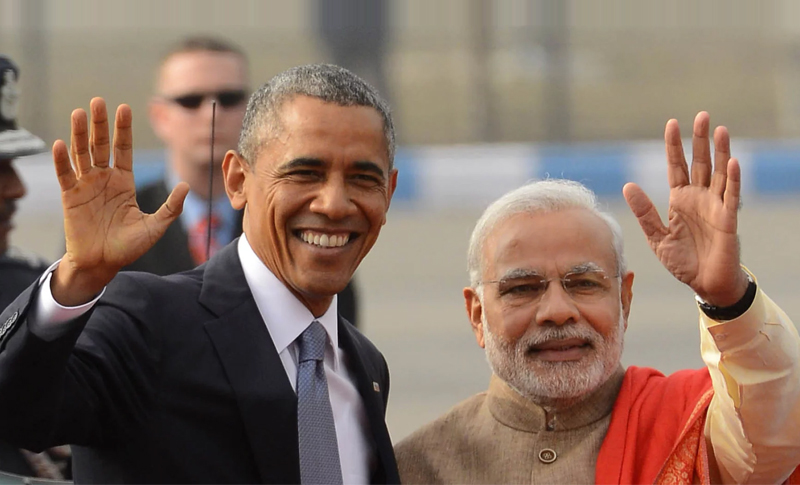 India is witness to the historic visit of US president Barack Obama on the occasion of Republic day celebration on 26th January 2015. It is highly significant to note that no US president has ever been the chief guest on the Republic day parade of India. Narendra Modi, the current Prime Minister of India visited United States in the last quarter of 2014 when he extended the invitation to Obama which was gracefully accepted.
Both India and the US are looking forward to this visit with the hope to strengthen the political and economic ties with each other. The visit id expected to boost foreign trade, foreign investment in India and the joint collaborations in the sectors of Defence, Agriculture, Technology, Manufacturing and much more.
Let us now examine with the help of Vedic Astrology that to what extent these hopes will turn into a reality.

Analysis of the chart of Independence of India

As per the chart drawn on 15th August 1947 of Independent India, there is Mahadasha of Sun and Sub dasha of Venus – both operative till September 4, 2015. This shall be followed by the Mahadasha of Moon. Sun is the lord of 4th house which represents general happiness, agriculture, crops and lands. Whereas Sun represent Government, Institutions, King and Senior Administration.

Interestingly during the visit of the President Obama the sub sub dasha will be of Rahu which indicates foreigners – amongst other things.

Sun and Venus are posited in the 3rd house which is basically communications.

As seen from the Moon Lagna, Jupiter will be in transit over the 1st house and Saturn is posited in the 5th house.

Without going further into the technical details, we can conclude that it is quite likely that the head of Government and his team (Modi and his Ministers and Senior Bureaucrats) shall be keenly working (at least during 2015) in winning over their friendly countries through communications and making better political and economic ties. It is clear that in the next few weeks, India and US will work together in the fields of communication technology, information technology, power, defence, manufacturing and agriculture.

Due to the positioning of Jupiter and Saturn in transit the talks will take place in a very cordial atmosphere with high trust factor but certainly the messages communicated shall be tough, clear and without mincing any words. It would not be easy for the American side to change the point of view of India as the Indian side will be very steadfast and firm on its views and beliefs. Although the joint declaration is likely to be reporting successful talks and very fruitful visit of President Obama but both the side will have to agree to disagree on certain policy matters. Overall it would be beneficial visit for India.


Analysis of the Horoscope of Narendra Modi

To confirm the observations in the previous lines, let us take up the horoscope of two heads who are going to meet and perhaps write a new chapter in the future of India & US.

PM Modi is in a strong position as his party BJP is in power with unprecedented majority in the parliament. Therefore, without worrying too much about the pulls and pressures from the opposition,he has relatively a free hand to go ahead and work for the progress of the country in whatever way he and his team deems fit. PM Modi is going through the Mahadasha of Moon which is the lord of his 10th house of profession. Moon is posited in the 2nd house with the strong Mars in its own house. The sub dasha lord is Rahu and the current sub sub dasha lord is Venus.

This clearly shows PM Modi and his Government’s idea of taking their business seriously and implementing the policies with a strong hand and determination. At the same time he and his team is giving due importance to foreign policy and foreign affairs of the country. Therefore, so many visits abroad of Modi and receiving a good number of heads of states after becoming the Prime Minister should not come as a surprise to any Astrologer.

Rahu in the 6th house is giving him the responsibility of making his enemies weak (if not make them disappear all together) The Moon – Rahu – Venus dasha combination overall shows that the progress of the nation is his top priority. He will work with in the country and also partner with other countries for the benefit of India economically. He will also leverage the partnership for putting an end to terrorism, territorial disputes and vanquishing the enemy. His planning may include inviting investments in India to create employment of masses and also creating more job opportunities for the Indians in USA through more Visas and less Visa restrictions.


Analysis of the Horoscope of President Barack Obama

The analysis of the horoscope of Obama shows that he is probably going through one of the best dasha periods in his life. His Mahadasha lord is Saturn which is posited in the Lagna. Interestingly, Jupiter the planet of expansion and benevolence is also placed in the same house.
In addition, President Obama is enjoying the great Sasa Yoga. His Saturn too is aspecting his 3rd house of communication and courage, 7th house of partnerships and associations and 10th house of profession.
At the same time, he too is having the sub sub dasha of Rahu till 3rd March 2015. This connects him with foreign affairs compulsorily, perhaps at the cost of ignoring his family life and health.

The common factors deduced from these horoscopes indicate that:

Overall it is likely to be a great visit to be watched for by one & all with great interest and shall be discussed for many weeks and months after.