A strong political figure and a revered person all over the world, Nelson Mandela is the role model for many. His contribution towards eliminating Apartheid and making South Africa – a democracy for all colours and races, have been monumental. Read about how the horoscope of Mandela changed the course of his life.

Nelson Mandela was the South African President and was prominently known as “The Mother of South Africa”. He was a strong fighter and hero of the civil rights and martyr who claimed victory in his lifetime’s crusade to establish a non-racial democracy for South Africa. A charismatic and beaming personality with glistening eyes, he went on lecture tours to run for public office.

He was arrested as a political prisoner on August 5, 1962 and spent 27 years in prison, to be released on February 11, 1990. He was awarded the Nobel Peace Prize in 1993 and became the Africa’s first President of colour on May 2, 1994 and served as his nation's president until June 1999. Mandela’s education was commenced at University College of Fort Hare and he completed his studies by taking correspondence courses. He attended the University of Witwatersrand where he qualified in law in the year 1942.

A member of the African National Congress, he protested against the apartheid policies [discrimination on basis of race] of the ruling National Party. Although the African National Congress was banned in 1960, Mandela continued his resistance efforts. He was arrested in 1962 and sentenced to five years' imprisonment with hard labor. On June 12, 1964 he was further sentenced to life imprisonment which did not affect his growing popularity among his country fellowmen. After his release on February 11, 1990, he continued his life's work to banish apartheid policies. In 1991, he was elected President of the African National Congress, the presidency of his country in 1994. Nelson Mandela passed away on a Thursday at the age of 95 on 8th December 2013. 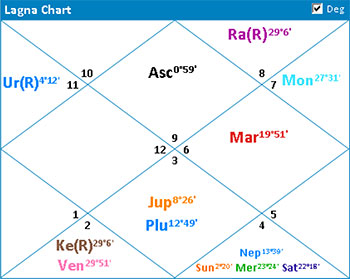 Nelson Mandela had Sagittarius ascendant and Libra Moon sign, which created within him the need for equality and justice for his country’s fellow man.

To conclude we can say that Nelson Mandela Horoscope reveals that his planetary configurations show that Nelson Mandela was a good speech-maker and as he traveled the world after his release from prison, promoting the revolution and the new South Africa. Mandela's support of liberation struggles all over the world was meaningful, inspiring and strong dedication towards his country was appreciated worldwide.

Vedic astrology often helps you find out the purpose of your life, which depends upon the placement of stars and planets in your horoscope. You too can avail a full Detailed Horoscope Reading to know what life has in store for you.