This article explores the astrological reasons behind the success of Mark Zuckerberg, the founder of Facebook. The various yogas and operating dashas that led to his success and rise of his enterprise - Facebook are discussed here. 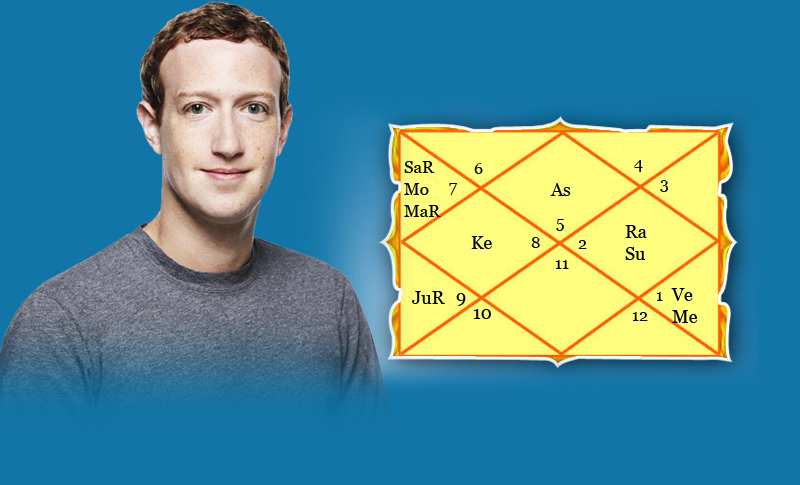 “If you just work on stuff that you like and you’re passionate about, you don’t have to have a master plan with how things will play out” - Mark Zuckerberg

What exactly gives this young entrepreneur and billionaire, a zen-like approach to life and success? It feels so natural, as if he is meant to be what he is. Looks like the cosmic bodies specially lined up for him to get it quicker for him than most of us can imagine. Some unique planetary clusters and placements in his birth chart set him apart from the rest. Let’s explore the horoscope of Mark Zuckerberg in detail to unravel the secret behind his incredible journey of becoming a technology tycoon.

What made him successful?

The cosmic force at work behind the workaholic tendencies of Mark is Saturn. His natal Saturn is in exalted state and so are Rahu and Ketu. To top it all, Jupiter, the planet of ‘luck and fortune’ is also positioned in own sign. Mark himself accepts, “Success like mine only happens with luck.” On a different note, he sees it as a huge problem that needs to be fixed, because every talented person should get entrepreneurial opportunities for his talent and not luck. Strong Jupiter gives him wisdom and inclination towards virtuosity and charitable instincts.

Mark has a strong Vasi Yoga in his chart that gives him a sweet yet compelling voice, and not to mention, a sharp memory. It also makes him what he is best known for, a genuine person. The unique planetary formations in his horoscope also make him passionate about his work and give him exceptional level of knowledge and intellect. That explains how he built his first program at the age of 12.

It won’t be wrong to say that Mark Zuckerberg is a fortunate individual. Some rare Dhan Yogas in his chart confirm that he will continue to enjoy financial prosperity no matter what. According to Samudaya Ashtakvarga, there are 40 points in his 1st house which indicates good health too. His stars make him a strong, kind, fortunate, humane and charitable being.

However, due to afflicted Moon, he may often have mood swings and Saturn’s Sade Sati effects are found on his life until Oct 2017, which is not a much positive period in terms of emotional and mental peace. Nonetheless, this is a good period financially.

When Zuckerberg launched Facebook from his dorm at Harvard on February 4, 2004, he was running main period of Saturn and sub period of Venus. Saturn being exalted in his chart affords him with sincerity and determination to accomplish his objectives and fulfill dreams. Venus, which is the lord of 10th house in D1 chart, is in Mooltrikon sign in D-9 chart, which got his career off to a good start at that time.

Zuckerberg has made continued progress since then and on December 1, 2015, he made a huge decision, to eventually give 99% of his Facebook shares to charity. At that time, the shares were worth US$45 billion.

Mark was running main period of Mercury and sub period of Ketu at that time. Mercury, the lord of 2nd (wealth) and 11th house (income and gains) was placed in 9th house of generosity, which could have triggered this philanthropic step. Ketu detaches one from material plane. This too could have compelled him to make this huge decision for human welfare.

2nd House - Mercury, lord of 2nd house in his chart is well placed in 9th, forming a strong Dhan Yoga. This placement affords him with a strong luck quotient. Fortune will mostly favor him in new ventures and undertakings, especially if it involves money. 2nd house gives him the desired resources and power to act on his intellect. The planets involved give him the wisdom and diplomacy in speech to succeed, without hurting anyone in the process, except unintentionally on some occasions. As he says, “You don't get to 500 million friends without making a few enemies”.

10th House - Venus, the lord of 10th house is also placed in house of fortune and luck, giving him added cosmic benefit. Venus is well placed in divisional charts too and this makes him extraordinarily creative in career matters. 10th house is occupied by Sun with strong Digbala, endowing him with unprecedented success, name and fame. This is why he got instant recognition and respect for his achievements. Exalted Rahu in 10th house is also behind his quick and sudden ride to business growth and success.

11th House - Mercury, the lord of 11th house of income and gains is placed in 9th house of luck and fortune. This means, he is bound to earn well and have a prosperous life. 9th house also equips him for charity and generosity. This is why he donates much of his financial gains. And as his horoscope shows, his income graph is only meant to ascend and rise further from now. It seems he has a long way to go, maybe beating Bill Gates. And more than anything, he will be as much respected for his community service as for his business endeavors.

Predications for next 2 years:

His financial state would see a remarkable rise during this period. Mark would have a fair share of appreciation, growth and acclaim for the work he does. His creative skills will get a boost and his vision will broaden. There will be lots of ideas to experiment with and dreams to follow. So expect him to launch some innovative stuff in the coming year. It seems fortune will be by his side during this main period of Mercury.

This mahadasa is equally promising for Mark. More name and fame awaits him in this period. This will be a bright phase when it comes to professional success and at the same time, his physical stature and personality will also become more impressive (do not expect him to switch from the theory of wearing the same gray t-shirt though). Jokes apart, it saves energy that he can consume in making better decisions through the day. Mars (passion) will be aspecting Sun (energy) during this period and it will give him enough strength and ability to work his guts off and achieve ambitions. Watch out haters! He won’t get stressed easily and his workaholic habits will continue to help him progress.