Mamata Banerjee or our beloved Didi, is the poster girl for 2021 West Bengal elections. We analyse her birth chart with the current astrological planetary placements to determine how she will fare in the ongoing elections. Know more about what’s in store for her.

Mamata Banerjee (Didi) is a renowned politician from West Bengal and is well known for her strong political career. She is the celebrity face of “All India Trinamool Congress” and the first woman chief minister of West Bengal. Currently, she is the epitome of leadership in West Bengal. 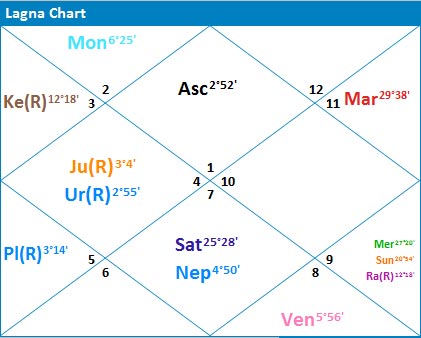 The birth information has been derived from public sources

According to the planets which are configurated with each other, with the thread of beads of degree, they will have to be evaluated astrologically to bring the hidden facts about this strong personality known as Mamata Banerjee or DIDI, to all people who appreciate her and her political work.

Mamata Banerjee is an Indian politician, affiliated to the “All India Trinamool Congress” and is currently participating in the West Bengal Elections which are being held in the month of April with results available in the first week of May. She has served as chief minister of West Bengal for two terms, including the present.

According to her planetary configuration, Mamata Banerjee’s Moon sign is Taurus, Ascendant is Aries, Saturn is the 10th lord (profession) and 11th lord (house of gains) is placed in the 7th house of public image.

Mars is the lagan/ascendant lord and 8th house Lord of sudden gains and placed in the 11th house of gains that makes her a strong, sharp and intelligent woman with bold physical disposition, impulsive in nature and action. She possess all the qualities of commanding people with her wisdom, courage and confidence. She will aim high in her life and are best fitted to command and govern others, as Mars, her personal sign planet is aspecting the 5th house of power seat of politicians.

Saturn the lord of the 10th [career] and 11th [gains] house and placed in the 7th house [public image] will give her all the merits of good political career with strong gains as Saturn represents masses and Mamata Banerjee’s Saturn is exalted and poisted in the 7th house of public image, giving her the strong diplomatic way of putting her best foot forward publicly, with confidence and how she can connect with people due to her down to earth approach and simple dressing style.

Jupiter is the lord of 9thhouse [fortune] and 12thhouse [loss] and Jupiter is posited in the house of stability in Cancer sign, which will give her stable initiative with quick action of temperament, which will always be beneficial in her political career. Moon in sign Taurus in the 2nd house [wealth], which is an earthy sign that makes her a determined woman with logic. The aspect of Moon in Venus in the 8thhouse will bring sudden gains in political career and aggression to accomplish her dreams.

Sun, the 5th house lord of power seat of political minister, is placed in the dual sign of Sagittarius whose lord is Jupiter along with Mercury forming the Budh-Aditya Yoga indicating aggressive approach and strong motivation to achieve her objectives and she came a long way to power by overcoming the opposition of communist regime.

In Navamsha and Dasmansha chart, Sun is placed in the 3rd house of initiative and 7th house of public image respectively, which indicates her continuous efforts and initiative to maintain public image, giving her leverage over opposition candidates.

According to the Sun placement in her horoscope, where we will appoint Sun as her ascendant- 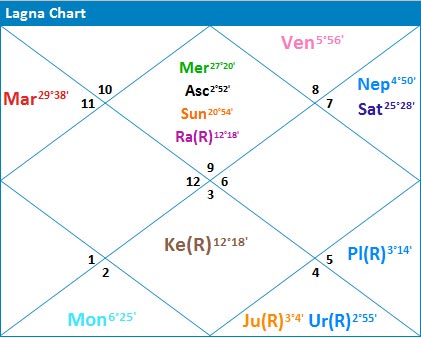 So the configuration of planets which is revealed, brings not only her strong political personality but also her intelligent ways of putting her points across with the public. The manipulated efforts with aggressive approach and intelligent strong motivation, with a sole purpose, is derived due to the conjunction of Sun and Mercury forming Budh-Aditya Yoga in the ascendant. It provides the necessary intelligence inputs that is required to get her work done, which is commendable in politics. Saturn is exalted in Libra sign in the house of gains and Jupiter is exalted in Cancer sign in the 8th house of sudden gains by Vipreet Raj Yoga. Exalted Moon in the Taurus sign makes her a strong opposition for her rivals who have the strength to turn the political tables in her favour. Sun in Sagittarius gives her the fiery wisdom and flexibility of innovative thinking to change her way of political approach, according to the current situation.

These placements have taken her to great heights in her political career in her life. Hard work and fortunate planetary placements favoured her as she became the first woman Chief Minister of West Bengal. Currently she is running her second term as Chief Minister.

Till May 2021, there is main period of Saturn and sub period of Rahu. Saturn, the main period lord will be in the 10th house of career in transit and Rahu the sub -period lord will be in 2nd house of wealth and relationship in transit along with Mars. It will be over the natal moon which may influence her decision making powers with false impression over any situation, which might not be beneficial for present the West Bengal election 2021.

Saturn, the main period lord will be in the 10th house of career and Jupiter, will move to 11th house of gains on 6th April in Mamata Banerjee’s natal horoscope in transit, which will bring strong chances of winning the election.

But the presence of Rahu in the 2nd house of money and relations and the presence of Ketu in the 8th house of obstacles may bring some political contradiction suddenly, which may make her win with close margin or her party will emerge as a very strong opposition in these elections.