What are the reasons behind Priyanka Chopra's talent and success? This article explores the strength of her chart and uses key astrology techniques to decode her future. 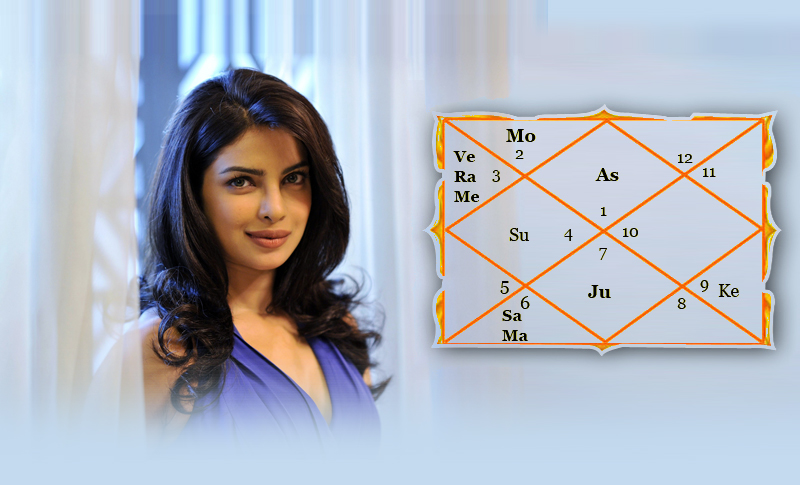 Priyanka Chopra is one Bollywood actor who seems to know no boundaries. Her body of work is constantly expanding to include newer genres and geographies. The small town girl debuted in 2003 and is now an international fame. Her journey from a simple girl to a globally recognized sensation has been truly inspiring. She knows how to break stereotypes through her work and choices. PC, as she is fondly known as, is unconventional to say the least, and so is her birth chart. Infact, her journey to stardom and international fame can be traced through her horoscope beautifully. The readers would find it an interesting case study on Vedic astrology!

WHAT MAKES HER SO TALENTED AND SUCCESSFUL?

Venus is well placed in her birth chart and in D-9 chart also, Venus, the planet of beauty and creative arts is placed in its mool trikon sign, which explains her exceptional talent and success in cinema.

The combination of Venus & Mercury gives her a creative spirit. Mercury is placed in 3rd house in own sign strengthening her influential yet polite communication. The placement of Jupiter, the lord of 12th house of foreign connection justifies her recent success abroad. Jupiter is well placed in divisional charts too.

Several coveted Yogas are also present in her horoscope. Vasi Yoga makes her skillful, genuine and charitable with an excellent speech.

She has a unique ability to make her way through adversities it seems, thanks to Sunapha Yoga in her birthchart. It also makes her calm, composed, well mannered and gives the ability to acquire wealth through self-efforts.

A Saral Vipreet Raj Yoga also forms in her horoscope so naturally, she knows how to sidestep troubles and come out as a winner. It gives her name, fame, wealth and a scholarly mind. This yoga also aids her in decision-making and is the reason why she always stands to her principles.

The success story of Priyanka Chopra began with her winning of Miss World Pageant in the year 2000. At that time, she was under the influence of Mercury sub period under Rahu main period. Rahu is known for giving sudden fame. Her natal Rahu is conjunct Venus, the planet of beauty and drama and is aspected by Jupiter, the planet of luck and fortune.

During Rahu-Venus period, Priyanka chopra faced a sudden fall in career, with 6 flop movies one after another starting from Salam E-Ishq in January 2007. Conjunction of Rahu-Venus in natal chart at times gives some defame and loss of reputation. But she learnt from her mistakes & proved her metal eventually.

It was after the movie Fashion in 2008 that her real walk to fame began. During that time, she was running Rahu-Moon period. Both these planets are exalted in her chart. Moon, the lord of 4th house is placed in 2nd house in exalted state forming a coveted Dhan Yoga, which blesses her with success and financial gains as well.

Her international success picked up pace with the onset of Jupiter Mahadasa when her Album In the City launched in September 2012. Since Jupiter is aspecting Venus placed in 3rd house of communication, she started off her foreign success story with the music album. Her dialogue delivery and voice has played an important role in her success journey. Transit Sun was also supportive at that time, adding to her name and fame.

Her Quantico series also began under main period of Jupiter and sub period of Mercury, which is aspected by Jupiter, the lord of 12th house of foreign.

SPECIAL PILLARS OF HER BIRTH CHART

2nd House - Exalted Moon has lordship of 4th house and is placed in 2nd house forming a good Dhan yoga. Lord of 2nd house of income is placed in 3rd house, which also fuels success. This combination gives her strong willpower and material achievements along with a charming personality and body.

10th House - This is the house of karma. Since the lord of 10th house has good strength, it makes her hard working and sincere in her work. Lord of 10th house is placed in the house of fortune, adding to the positive prospects. This indicates towards possibilities of respect and honor in her field of work.

11th House - Lord of 11th house of income and gains is Saturn, having good strength overall. Since Jupiter is also aspecting this house, she has the blessings of the luck lord in terms of income. Despite the losses due to Rahu’s aspect, she will continue to gain success and profits.

PREDICTIONS FOR THE NEXT TWO YEARS For PC

During this period, destiny will generally be in her favor. While she may spend heftily, financial gains are indicated too. Her words will work as charm on others. Her communication ability will help her leave lasting impression during this time.

Ketu is exalted in her horoscope. Support of luck will be there but health might demand attention. Over stress or workload could take a toll on wellbeing. Siblings may also need more caution in life.

During this period also, her health could necessitate frequent medical appointments. On the other hand, monetary rise is well on the cards. She might indulge more in luxuries & material comforts during this period but her fame will also increase at the same time.