Dalai Lama presents an interesting childhood and an even more interesting life, known worldwide for his benevolent humanitarian activities and philanthropy. He is one of the most famous and revered spiritual leaders of the world, basing his findings on Buddhist philosophy. Find out about the astrological analysis of his horoscope.

Dalai Lama a XIV is one of the most renowned spiritual leaders of the world, hailing from Tibet. His Holiness the 14th Dalai Lama, Tenzin Gyatso, describes himself as a simple Buddhist monk. Majority of the Tibetans believe him to be the reborn soul of Lord Buddha who is the proponent of compassion, the Protector of the Land of Snows, the Holder of the White Lotus, the Mighty of Speech, Tibet's Wish-Fulfilling Gem, and Kundun – the Presence.

Dalai Lama was born Lhamo Thondup on July 6, 1935 in Taktser, China. His Holiness began his monastic education at the age of six in Tibet. At 23, His Holiness sat for his final examination in Lhasa’s Jokhang Temple, during the annual Great Prayer Festival (Monlam Chenmo) in 1959 and was awarded the Geshe Lharampa degree, equivalent to the highest doctorate in Buddhist philosophy. At age 15, he assumed political power of Tibet as the Dalai Lama. The Dalai Lama has also conducted hundreds of conferences, lectures and workshops worldwide, as part of his humanitarian efforts. He was awarded the Nobel Peace Prize in 1989.

In 1950, after China's invasion of Tibet, His Holiness was called upon to assume full political power. In 1954, he went to Beijing and met with Mao Zedong and other Chinese leaders, including Deng Xiaoping and Chou Enlai. Finally, in 1959, following the brutal suppression of the Tibetan national uprising in Lhasa by Chinese troops, His Holiness was forced to escape into exile. Since then he has been living in Dharamsala, northern India. 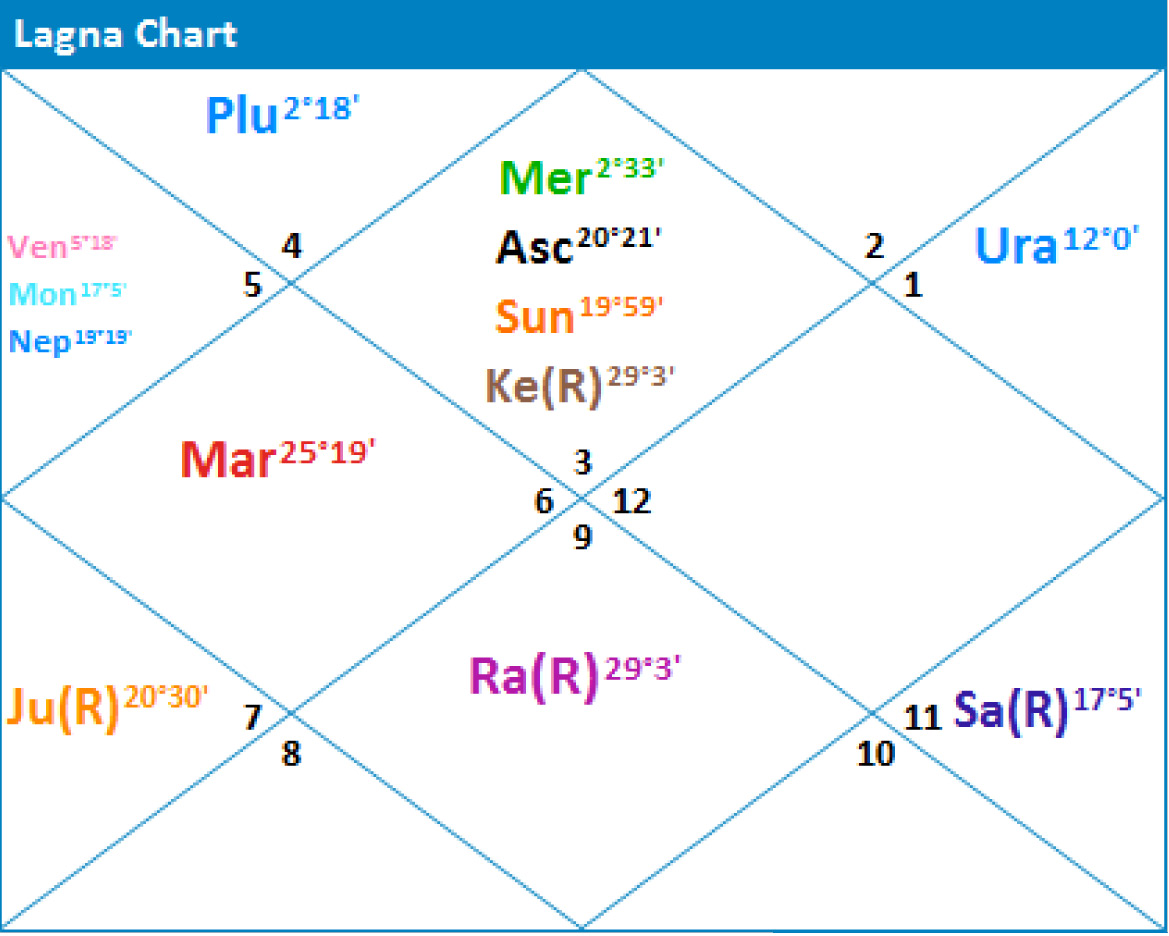 Dalai Lama has Gemini Ascendant and his Moon sign is Leo. The horoscope of Tibetan spiritual leader Dalai Lama has his Ascendant lord Mercury, well placed in its own sign Gemini, which makes him a strong personality by nature and by speech.

Check out if you have Budhaditya Yoga in your horoscope and see what it means to have it and its impact in your life.

Currently Dalai Lama is under the Main period of Saturn and Rahu till the year 2023, where his spiritual height will be enlightening among his followers but he will have to be very careful in regard to his health.

To gain a proper understanding of how your life will be and what purpose you are going to achieve in this life, check out the personalized Detailed Horoscope Reading, where you will have answers to all your questions regarding love, life, career, family, wealth and health.