What makes Cristiano Ronaldo one of the greatest footballers of all times? His horoscope analysis below provides the answer!

Cristiano Ronaldo (Born, Cristiano Ronaldo dos Santos Aveiro) is a Portuguese professional footballer, who is considered as one of the best players in the world in the present times. He is also one of the most celebrated sports personalities across the globe. With countless achievements, records, titles under his belt, including the Portuguese title of Knighthood & Portuguese Order of Civic Merit, he is debatably the greatest player of all times.

Off the field, he is also an active philanthropist & was named the world's most charitable sportsperson in 2015. Indastro.com brings to you the detailed analysis of his birth chart to help understand what makes this prolific footballer the most important player of his team even at the age of 33. 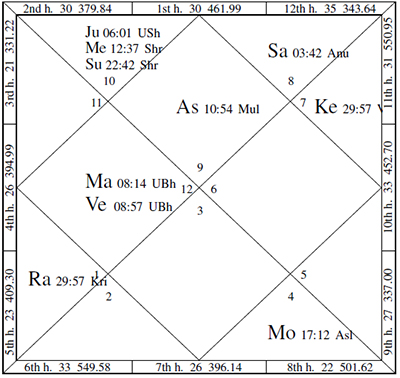 Cristiano Ronaldo’s birth ascendant is Sagittarius, which is a fiery sign. Leo sign is in his 9th house i.e. the house of destiny. Leo brings creativity & artistic presentation. The fiery energy of Sagittarius & the creative ability bestowed upon him by Leo shape his life & career as a star player, making him the wonder boy of modern times.

Sun is placed in the 2nd house i.e. the house of acquired assets & dignity. Sun stands for leadership, royalty,& authority, and in his birth chart, is posited in the Nakshatra of Moon, another luminary. Combined effects of the two luminaries in the chart make for his bright fortune, while the Sun makes him the leader & authoritative figure that he is on the field.

Apart from his flamboyant & graceful presence on field, Sun is also responsible for the splendid fortune that he enjoys & will continue to enjoy through his life. It plays a vital role in defining his inherited physical & mental capabilities that drive his destiny. Being posited in the 2nd house, Sun also makes him a giving person, which explains his cosmic contributions towards charities & life support services.

Cristiano Ronaldo's horoscope hints at a glorious period ahead of him, with his reputation & status to reach new milestones. Even past his glory days as a star player, he is bound to earn the respect of all his fans when he dons the cap of the coach. His later days are reflected in comfortable & respectable conditions, & should not make him miss his past limelight as a player much.