This article creates an astrological portrait of Angelina Jolie from a deep analysis of her birth chart. Read on to find out what the future holds for her. 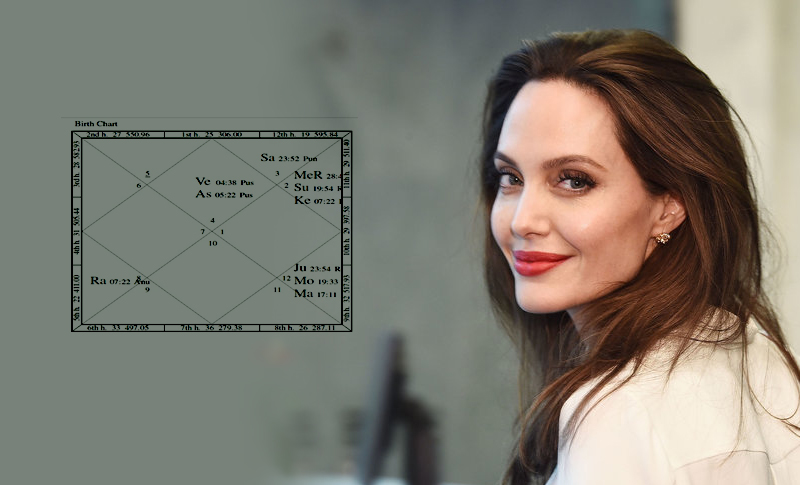 Angelina Jolie, one of the most sought after names in Hollywood, is an American actress, filmmaker, and humanitarian, who has received multiple awards for her on-screen skills.
Through the years, she has often been cited as the world's most beautiful woman by many media moguls, and is quoted as Hollywood's highest-paid actress.

Apart from her film career, Jolie is also noted for her humanitarian efforts & has received many honors for the same. We at Indastro.com have studied her birth chart to disclose what makes her one of the most influential and powerful luminaries in the American entertainment industry today. 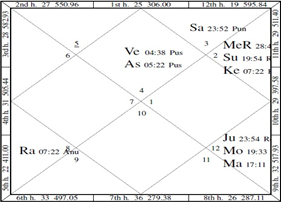 Angelina Jolie’s personality is a gift from Venus, which resides in her birth chart with Cancer ascendant. This brings her an extremely attractive persona, fame, prosperity, fortune & acclaims from her countless fans across the globe. Venus, the goddess of beauty, bestows upon her the blissful & splendid second-to-none physical appearance & charm.

The trio of Jupiter, Moon & Mars is posited in her house of luck. Jupiter with Moon, where Jupiter owns the aspect of luck & fame, and Moon, the ascendant lord, create a strong sphere of good luck which spreads in all directions & helps Jolie shine in all situations. Jupiter & Moon, have been joined by Mars, indicate excellent progress on the professional front, since Mars owns the house of career.

The 9th house is responsible for international fame. With a retrograde Mercury in this house, she excels in symbolism & conceptual work than being clever with numbers or details. This also signifies her artistic nature & disinterest in mundane things.

Here is how the various planets in her chart have influenced her life:

Venus: Venus is majorly responsible for making her the ultimate enchantress in Hollywood. The planet of love & beauty is posited with Cancer ascendant in her horoscope & drives her life towards love at every turn, simultaneously making her personality bloom gracefully with age.

Sun: Sun resides in the house of income & has the lordship of wealth & family. This brings her wealth, but being posited with Ketu, takes away familial happiness. This points out towards her troubled relations with her father in early life.

Saturn: Saturn has been producing mixed results for her. Being in the 12th house, it gives her multiple marriages & a temperament that suits her lifestyle with extensive fame & public dealing. However, this also hampers her coexistence with a partner/spouse for long. Saturn also governs the house of hardships. This makes her work hard for everything she wants & simultaneously, indicates setbacks in her life.

On one hand, Saturn makes her a philanthropist at the core, resulting in several child adoptions from the third-world countries & making her a voucher of human rights & women cause. However, Saturn has also been the key factor for all the tough times she has had to face from a very early stage in life, including her battle with the Cancer Prevention Treatment, which she fought so well.

Rahu: Rahu has produced for her some very interesting prospects. Rahu has had a strong influence on her creative skills & is probably the biggest reason for her success as an actress. It has endowed her with the adaptability to instinctively relate with a character on-screen & portray it accurately. However, Rahu is also responsible for her silent demons, which have resulted in many failed relationships & lack of trust for others. Rahu also causes a difficult relation with father.

Placement of Saturn with Rahu:

This combination will have a major effect on her family. It is highly likely that all but 1 of her children will move away from her, as time passes.

Investment in Real Estate is the best option for her. She is likely to have a substantial portfolio by the end of her life.

Angelina Jolie’s horoscope shows a brilliant time for her ahead, with her success & progress expected to reach new heights in the coming years. Her life is likely to take a beautiful path in the later stages, showered with grace & elegance. Marked by abundance & opulence, her old age appears comfortable & peaceful, with very little left to ask for.

Dasa Interpretation report can give you a similar analysis of your birth chart. Your horoscope is studied for the predictions related to current & upcoming dasa periods in this reading.