This article talks about the success, riches and fame of Donald Trump. What lies in future for him? 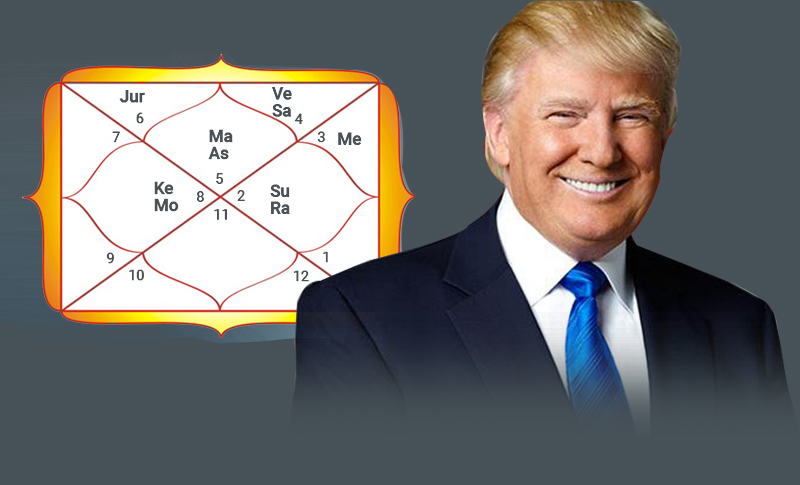 Donald Trump’s personality is as rare as the combinations in his horoscope. From his dynamism to his movement to facial expressions, everything commands authority, thanks to the remarkable alignment of stars in his chart. Vedic analysis of his horoscope clearly suggests that he is not a man who can go unnoticed.

WHAT MAKES HIM RICH AND SUCCESSFUL?


Mars in Leo (ruled by Sun) in ascendant gives him a commanding, confident, and ambitious personality with a will to take risks and tread the unknown paths. But at the same time, this combination makes him super dominating too.

This is the key aspect of his chart that makes him the inspirer and the reason why he likes to be followed than follow. Now we know why he is a born rabble-rouser.

Trump is not someone who can fail in business. And no matter what he does, money continues to flow in.

There is a strong Dhana Yoga in Trump’s chart with 2nd lord placed in 11th house in own sign, from where it aspects 5th house. This shows that he is carrying success and money wherever he goes, right from the start. In a nutshell, he is born to be a star.

But Trump has also had his fair share of troubles.

Trump is as famous for his candidness and blunt attitude as he is for confidence.

While the lord of 2nd house of speech is Mercury, but it is placed in Rahu’s nakshatra in Trump’s horoscope, giving him a dauntless and often harsh way of speaking. This also explains his tendency to not think before he speaks. On the other hand, Jupiter in 2nd house gives him words that hit right at the point, unbelievable but true. Aspect of Rahu on 2nd house of speech which is placed with ascendant lord Sun gives him an unrestricted speech and the notorious inflammatory language.

Whenever he lashes out, it backfires in some way or the other, mostly in form of criticism. Donald Trump has been consistently accused of belittling and stereotyping women. And there are more than one combination that validate these occurrences.

Venus that represents women is placed in the sign of Moon (a feminine planet) in the 12th house, which relates to bed comforts, hidden enemies and addictions. 7th house represents partner and opposite sex and its lord has moved into 6th house of disputes joining Venus. This combination gives him the allegedly criticized attitude towards women and also indicates defame & disputes through association with women. More or less, it also indicates a great deal about his bumpy married life.

Rahu main period from 1998 to 2016 turned out to be the key differentiator that changed his life completely.

Moon and Venus in chart are placed in axis of 6th (debt) and 8th house (losses and loan). When the main and sub period of Moon-Venus hit Trump in 1989, he had to face $900 M debt and bankruptcy. However, it was after 1998 when his golden period kicked off as the main period of Rahu began.


Other than a positive ascendant, the strongest pillars of his horoscope are 10th, 2nd and 11th house, indicating sure-shot success and fortune.

10th house - Rahu (politics) is placed in 10th house of career with Sun (leadership) in Taurus, which is ruled by Venus (luxuries). The combination gives him an obsession for money, luxuries, and extravagant lifestyle.  Venus signifies acting and drama, while positive Rahu gives fame and success. The main period of Rahu started in 1998, which substantiates his identification with the Reform party at that time, marking his entry into politics. During the Rahu main period itself, Trump rose to fame through hosting NBC’s Apprentice for a decade starting from 2004. The Rahu main period also paved the way for presidency before it ended in November 2016.

2nd house - As soon as benefic Jupiter’s dasa started, inauguration of Donald Trump as president of United States took place, commencing his 4-year term. Jupiter, the planet of luck is placed in 2nd house of wealth in Trump’s natal chart and is aspected by a well-placed Rahu, which is in exalted sign.  Trump was undergoing second phase of Sade Sati when he earned presidency as Saturn was transiting over natal Moon in the 4th house, which signifies public and popularity among the masses. The lord of 4th house, which represents family and domestic comforts, is placed in 10th from 4th house, which explains the potential White House roles of his family members in administration.

11th house - 11th house of gains and desires is occupied by Mercury placed in own sign. Since it is placed in Rahu’s constellation, it gives Trump an uncanny ability and determination towards fulfillment of desires, by hook or crook.

PREDICTIONS FOR THE NEXT TWO YEARS


Based on Vedic analysis of Donald Trump’s horoscope, the period of Jupiter-Jupiter will be operating until January 2019. Thereafter, Jupiter-Saturn period will commence.

Until Nov 2016, Rahu main period was running which planted the seed of his popularity. And Jupiter, being the planet of expansion has been since facilitating further growth thereafter. It seems that now is the time for Trump to reap the benefits and more achievements, fame and financial gains are expected  down the road for him. However, Jupiter retrograde might cause some health specific issues, as it is aspecting 6th house that is occupied by its debilitated sign.

This period indicates some mental pressure due to domestic issues and a lot of travels too.

The period until April 2018 is positive for international contacts and deals but some defame or loss is expected through a female or opposing party.

Trump might launch some new policies in this time that could benefit the masses. He will shine out as a leader during this time.

This period indicates more attachment and involvement with family matters but lack of mental peace is expected.

This period will fuel his aggressive instincts. Some hasty actions could be initiated that might not prove much favorable in the long run.

Rahu sub-sub period will again help him rise. However, he might become too insistent and disciplined in his ways to curb corruption, even if it means applying force or violence.

Some physical distress and health issues are expected during this phase. Dispute or lawsuit is also evident as per the running period but it is quite possible that he will have an upper hand over opponents.