What made Narendra Modi rise to fame and reach the peak of his Career? This article explores the astrological perspective of his success and what is in store for him in the future. 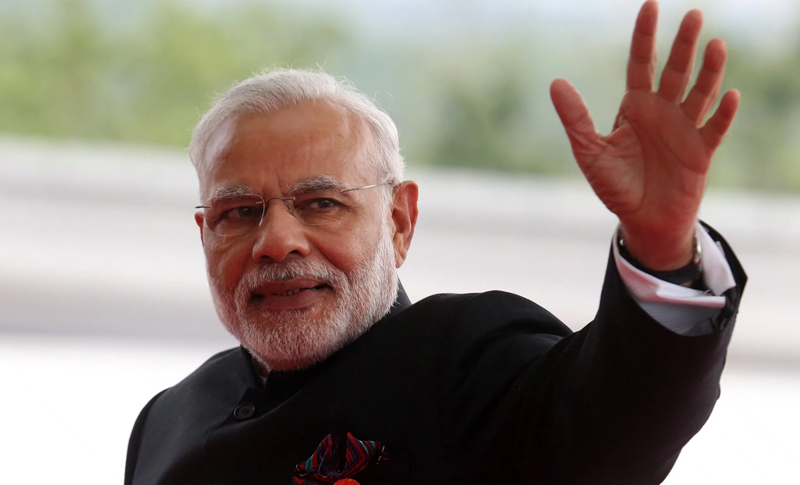 There are no two opinions about the fact that Narendra Modi, the current Chief Minister of Gujarat has taken the centre stage and has taken the Indian politics by storm. His party - BJP is elated and has suddenly found a new hope. The party members are feeling empowered after announcement of Modi as the Prime Ministerial candidate. Going by the way the electronic media is reporting the current political affairs and is covering the pre election rallies, Modi is a direct and a serious threat to Congress Party and its Prime Ministerial candidate ( whosoever it’s going to be). 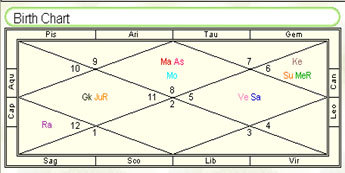 Who would be the next Prime Minister of India. Is it going to be Narendra Modi or Rahul Gandhi? While the media is giving some projections through surveys and polls, people will continue to look towards Astrology to provide a definite answer.

So what are the promises hidden in the chart for Narendra Modi - the man going so strong with his untiring campaigning and strong speeches.

Can he take on the big and established party like Congress and not to underestimate the third front? Will he have a successful national level political career? Let us try to decode these from his horoscope.

Based on the data available on the internet, his horoscope was prepared as follows:

Now let us apply the Benefic Yogas (combinations) and see if Narendra Modi, his life and style match with them:

A native born with such Yoga in his chart is proud, learned, wealthy, liked by ruler, famous, of stable nature. Such a person is said to be trustworthy and has qualities like stability, durability, fixed and determined.

One born in Kedara yoga will be useful to many.He could be an agriculturist, would be truthful, happy, fickle-minded and wealthy.

If there is a natural benefic in the 10th house of the chart of a person (as seen from Ascendant) then he is said to be likeable and helpful, enjoying a lasting fame.

Benefic planets occupying the Kendras and 6th & 8th houses either vacant or occupied by benefics only. The person is renowned, illustrious, fortunate, wealthy, an orator, charitable, leader of a town or a city, learned and very lustful.

This yoga implies that the native will build up his wealth through his own efforts. Narendra Modi does fit into these descriptions easily but we have the best one saved for the last.

This combination is not so common. This yoga takes places when Mars is in Kendra and is exalted or is in its own sign.

"Such a person is said to bold and courageous, full of strength and vigor, and eager to pursue adventurous activities where from name and fame is gained. The person is, of royal bearing and ever intent on combat, the commander of an army and annihilator of opponents. The person has great capacity for discrimination and is devoted to elders, preceptors."

Narendra Modi is born in Anuraradha Nakshatra. It is the Nakshatra of Saturn. In his natal horoscope, Saturn is the lord of 3rd and 4th houses. Saturn is posited in his 10th house of profession.

People born under this Nakshatra exhibit a fusion of qualities such as sociability, joviality and energy to overscome the challenges – which they are sure to possess. This birth star has a unique penchant for using varying and diverse channels of communications.

Such persons are said to be blessed with a very sharp mind which can easily understand the situation in its exact reality. They can see through the fake cover and reach the facts. Yet such persons keep their personal secrets well guarded despite their openness and sociability.

Anuradha Nakshatra born are believed to be amiable and balanced with love for rationality.

His Lagna (Ascendant) as well as Moon Sign are both in Scorpio. Mars the lord of zodiac sign - Scorpio is present in the lagna itself. This makes the Moon debilitated but there is Neech Bhanga Rajayoga also present in his chart. This contributes to Narendra Modi’s qualities of being energetic, direct and hard hitting in his speech as well as aggressive. It may not be controversial to say that he is a man with killer instincts.

Scorpio is a fixed sign and with Moon and Mars present in it, gives it qualities like stability, memory and ability to fight back or criticize someone sharply.

If you have been following Narendra Modi on TV or through Newspapers then you would confirm the presence of such traits in him.

The 3rd house is the indicator of courage and the ability to meet challenges. Modi seems to have this in plenty which is being applied in his line of profession. Saturn, the lord of his 3rd house is well placed in the 10th house. Saturn is a strong planet in his horoscope with the shadbal of 1.44 and so is his 3rd house with 32 Ashtakvarga points - we will use these values in the next few lines. This combination provides him with good courage, determination, strong will power and stability of mind.

The study of 4th house is important while analyzing the chart of the nation and its political leaders. Modi’s has the lord of 2nd (speech and voice) and 5th lord (intelligence, skills) in his 4th house - which is Jupiter. Not only Jupiter is aspecting his 10th house but is also forming an excellent Raj Yoga - ‘Gajkesari’ (already discussed in this article). Such a combination makes him a sought after man and popular with masses. Furthermore, there is an aspect of Lagna Lord Mars on this house.

This is the karmasthana of the native or the house of action, career, profession, name and fame. There are many positive features to be seen here. Firstly, his 10th house sign is Leo and its lord Sun is in the position 2nd from itself. This means Sun is in the 11th house (significator of gains from profession). In layman’s language, Modi has the promise of royal position or dealing with royalty.

Secondly, there are two planets posited there – Saturn and Venus. The presence of Saturn links him with masses. Saturn also binds him to his duty and commitment with a strong sense of discipline. Venus as the vargottam planet adds to the strength and beauty of this house.

Thirdly, Jupiter’s aspect on this house further gives him enormous power and authority to be a good administrator – in other words an able leader. This also links his 10th house with 2nd, 4th and 5th house. It would not be an exaggeration to say that he will do his job with utmost sincerity.

Operating Dasha, Transit of planets and the Results

Since November 28, 2011, Modi is going through the maha dasha of Moon which will last for a period of 10 years. The current sub dasha is of Rahu which started on 29th April 2013 and will be followed by sub dasha of Jupiter 29th October 2014. The Moon - Rahu combination is generally not very auspicious.

Furthermore, he is experiencing the 1st phase of Sade Satti. In addition, both Moon and Rahu are in the nakshatra of Saturn.

During the dasha of debilitated Moon (lord of his house of luck) and sub dasha of Rahu (positioned in the 5th house), he will have to work hard and also think smart (out-of-the-box and innovative would be more appropriate here) to move ahead.

Therefore, it may not be wise to only depend on luck. He will have to plan smart, work hard and execute well and write his own destiny. This is not going to be an easy period for him.

As regards the positive words, it can be said that he has to leverage his experience, strength, achievements till date and good associates. But going by the Dashas, it may be a possible that he may find himself in a weaker position or even ditched by his own party members, close associates & confidantes.

The presence of favorable yogas (combinations) in his horoscope such as Gaj Kesari, Budha Aditya Yog, Raja Yogas and Dhan Yogas will bless him with intelligence, success, fame, power and position.

The sub dasha of retrograde Jupiter aspecting the 8th, 10th and 12th house, will bless him with success, fame, power and position. And due to the sub dasha of Jupiter, the benefits shall be apparent and visible to all.