Horoscope Analysis of Alia Bhatt: What makes her successful & talented?

What are the reasons behind Alia Bhatt's talent and success? This article explores the strength of her chart and uses key astrology techniques to decode her future. 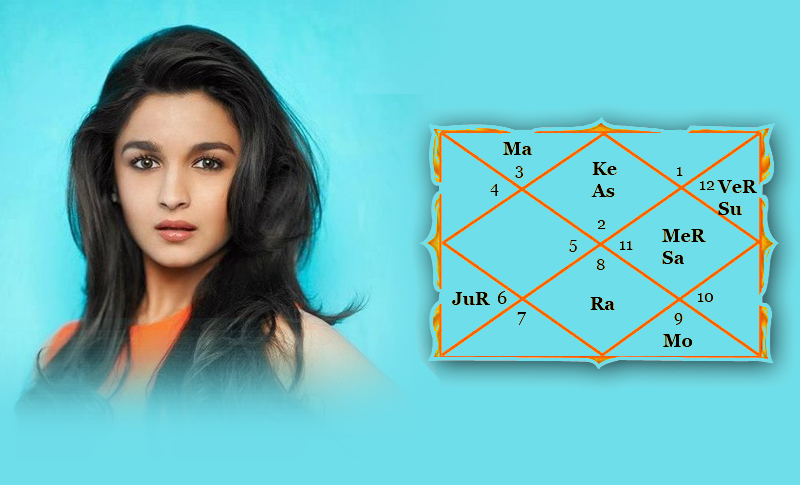 Five years, nine films, and the quickest ride to fame! The journey of Alia Bhatt has been anything but baffling.  Yes, Karan Johar had launched her and we agree she is talented, but what’s there in her stars that makes her so enchanting and a bankable star?

What makes her successful and talented?

Venus, the planet of luxuries, creativity, and beauty is the ascendant lord, and placed in 11th house in the horoscope. It’s the strongest planet in her chart giving her that irresistible charm and beauty. And it’s placed in the house of income, which explains her quick journey to becoming one of the highest paid Bollywood actors.
It might sound surprising to know that Alia is currently under Saturn Sade Sati until January 2023. But Saturn is the yog karak planet in her chart and it’s placed in the house of career in own sign, forming a coveted Sasa Mahapurusha Yoga. Saturn is also exalted in D-7 chart. With such strong planetary alignments, it seems she will continue adding new chapters to her success story.

Alia debuted in Bollywood as a child actor in Sangharsh, which was also the beginning phase of her Venus Mahadasa in 1999.

Venus Mahadasa paved her way to stardom.
Her first break as a lead actor in Bollywood was in the movie Student of the Year during Venus-Saturn period in 2012.

After her Venus Mahadasa ends, Sun Mahadasa will commence from Feb 2019 onwards, which is also a strong planet in her chart placed with Venus in 11th house. It promises to keep her in the limelight for next few years. The strong influence of Venus also explains her singling talent and inclination towards music and drama.

Alia also has Gaj Kesari Yoga in her horoscope as Jupiter in Kendra is giving her the blessings and endowing her with generosity, luck, fame, prosperity and wealth.

Planets are also forming Vasi Yoga in her chart, making her soft spoken, genuine, skillful and favorite of all. People with this yoga tend to be careful in signing documents, which validates her choice of versatile scripts and rise to prominence in 2014 with movies like Highway, 2 States, and Humpty Sharma ki Dulhaniya

SPECIAL PILLARS OF HER BIRTH CHART

9th house - Saturn, the lord of 9th is powerful and exalted in D-7 chart. It gives her wisdom and inclination towards meditation and peace inducing activities. And we all know how much she loves Yoga, even on vacations.

10th house - Saturn in 10th house in its own sign is forming a strong “Maha Purusha” yoga. Saturn is in conjunction with Mercury & both planets share a friendly outlook. Mercury is the lord of 2nd house (wealth) & 5th house (entertainment) is making a strong Dhan Yoga creating strong possibility of income from entertainment.

11th house - Exalted & powerful Venus being posited in the house of gains makes glamour a major source of income for her. Jupiter, the lord of 11th house is aspecting its own house, further strengthening the combination. Her social circle will support her throughout.

PREDICTIONS FOR THE NEXT TWO YEARS

During this period, she will have sound financial growth. Wealth accumulation & savings would increase. Destiny will favor her and she will get positive results of her hard work

Ketu is debilitated in her birth chart during this period. This could affect health somewhat negatively. Relationships may also get disturbed.

This is a financially strong period for her. Health will also stabilize. Position of transit planets indicates prosperity and satisfactory progress.

Her mother’s health could be a cause of concern during this period. On a positive note, she will gain multiple sources of income. Indulgence in luxury items & experiences would be there.

During this period, she may feel some mental pressure. Level of responsibilities and workload could cause stress. She may also undergo some sort of psychological problems and anger issues.

She might lose her temper over minor issues way too often during this period. Quite atypically, she might also use harsh language. Someone in her immediate family may also need attention in terms of health.

Personal health setbacks may be there in this time, especially related to stomach. Some hurdles might take place in handling relationships as well. Financial gains will be absent temporarily.

During this period, Jupiter will be the weakest planet in her horoscope. While she might suffer on the health front, financial or sudden gains are indicated.

During this period, destiny will favor Alia. Elevation or some betterment in profession is indicated. Health of mother may be a matter of concern.

During this period, accumulated wealth will increase. She will gain power & resources and will be fortunate. Professionally also, good progress is indicated.

A new source of income will be generated during this period. Name & fame will also increase. Some favor or appreciation can come from Govt. too.

During this period, mental stress is indicated. She might feel a bit over sensitive and get hurt too easily.

Obstacles & hardships would be present during this period. Expenses will peak up and someone in family may need care. Heated arguments and disputes could spoil her image at this point.

During this period, her health may suffer. Some hurdles or obstacles could be present in cash inflow. Communication may also suffer.

Proper care of health is required in this period. On the other hand, she will take some wise decisions during this time and also do well monetarily.

During this period, luck will support her and career progress will quicken but she must utilize opportunities that come her way.

Her liquid wealth will increase during this period. She will likely start earning more from her acting career.

During this period, relationships need care. Some compromises will be required from her end. Positively, name and fame could be gained after effort.

During this period, she will likely be at the top of the glamour world. Higher success will be achieved, as her sincere efforts will pay well.