British Politician Boris Johnson was fated to be a famous world leader. Being the Prime Minister of one of the most powerful countries of the world – UK, surely has brought him to the forefront of world politics. Let us study his birth chart and see what planetary combinations and placements, made him what he is today.

ALEXANDER BORIS DE PFEFFEL JOHNSON is a British politician and is currently serving as the Prime Minister of the United Kingdom from the year 2019. He is a very well renowned personality, born on 19th June 1964 to writer Stanley Patrick Johnson [father] and artist Charlotte Maria Offlow Johnson Wahl [mother] in New York. He was educated at Eton College and studied Classics at Balliol College, Oxford. He and his siblings were encouraged by their parents to engage in intellectual activities from a young age and were expected of high achievement, which were greatly valued and appreciated. Johnson's earliest recorded ambition was to be "world king" and based on his personal childhood quote it is visible that he was very clear of his ambitions.

He had a strong series of good political career and achievements in his political life, which were influenced by his hard work and good intellect where he incorporated manipulated efforts that are reflected in his success ladder in politics.

He was elected the President of the Oxford Union in 1986 in his college life. In 1989, he became the Brussels correspondent, and later, a political columnist for The Daily Telegraph, where his articles exerted a strong Eurosceptic [a person who opposes] influence on the British right. He was editor of The Spectator magazine from 1999 to 2005.

ELECTION TO PARLIAMENT- In 1997 Johnson was selected as the Conservative candidate for Clyde South in the House of Commons, but he lost decisively to the Labour Party incumbent Martyn Jones. Johnson again stood for Parliament in 2001, this time winning the contest in the Henley-on-Thames constituency.

MAYOR OF LONDON – In 2008, he was elected Mayor of London and he resigned from the House of Commons; he was re-elected as Mayor in 2012. During his office term as a Mayor, Johnson supervised the 2012 Summer Olympics and a number of innovative schemes like cycle hire scheme, New Route master buses, the Night Tube, Thames cable car and banned alcohol consumption on much of London's public transport, which was very well appreciated by everyone.

Return to Parliament, the Brexit referendum, and failed pursuit of the Conservative leadership:

In the 2015 election, Johnson was elected MP for Uxbridge and South Ruislip. The following year, he did not seek re-election as mayor and became a prominent figure in the successful Vote Leave campaign for Brexit in the 2016 EU membership referendum. He was appointed foreign secretary by Theresa May after the referendum and after Theresa May resigned in 2019, he was elected Conservative leader and appointed as the prime minister.

Johnson is considered a controversial figure in UK politics, where his supporters have praised him to be innovative, walking with the modern contemporary world where his actions and ideas are viewed as pragmatic [practical] by supporters and opportunistic by his political opponents. Johnson is identified as a one-nation conservative and has deep-rooted associations with economically as well as socially liberal policies. 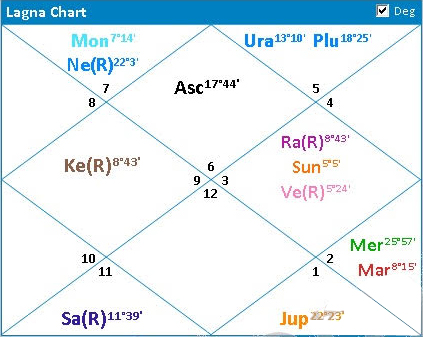 Boris Johnson has Virgo Ascendant and Libra Moon sign with Mercury as his personal planet, posited in the house of fortune. It can be interpreted that he is an intellectual personality with good looks and a very good at expressing his ideas to the public.

Some interesting facts of the year 2021 about Prime Minister Boris Johnson:


The futuristic galleries of Boris Johnson are very illuminating as he will be under the main period of Mercury, his personal planet and the Sub period of Venus, his strong planet till December 2022. This will give him overall prosperity with his reliable and steady and steadfast political approach in the political career.

The transit of the slow moving planet Saturn, which is the strength of Boris natal horoscope, will be progressive in the house of creativity and health and opposition throughout the year 2021 and 2022 and will bring in lot of political gains that will strengthen his financial prospects. But, the health pattern has to be taken care with priority along with overpowering the opposition with tact and diplomacy.

Jupiter will be rotating in the 5th house and 6th house of creativity, health and opposition of his horoscope and will reward the Boris with the wisdom inclination and the art of concealing ideas from opposition. It will reward him with the ability to deal with adverse situation and bring about the success in all his political ventures with his insight and winning over his rivals by his diplomatic tactics policies.