The astrological reasoning behind the rise of Amitabh Bachan - the Indian Cinema legend!

Famous as BIG B – this month celebrates his 71st birthday. Born on 11th October 1942, in Allahabad, to a famous writer and poet, Harivansh Rai Bachan [Shrivastava]. 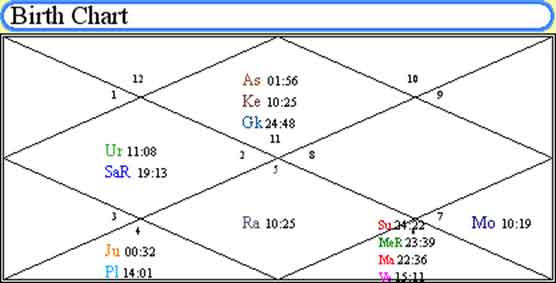 Big B made his film debut as a voice narrator in Mrinal Sen’s film Bhuvan Shome. Thereafter, he got an acting role in Saat Hindustani and then many series of films thereafter. Big B became heart throb of the industry his first mega hit film Zanjeer portrayed him with new persona- ‘angry young man’. That was the period that was ruled by Shani. Then after that the period of slump from 1988 to 1992 when the major periods were changing from Shani to Budha. After that was the period of ups and downs and criticism in politics overall in major period of Budha.

Big B managed to come back after 2000 when Budha was at its ending phase by Mohabbatein, that fetched his third filmfare best supporting Actor Award. His presence in KBC became a massive hit and broke many TRP records.

Now this year The Big ‘B’ will be completing 71 years on 11.10.2013. What planets say for Him-- He is currently running Ketu maha dasa with Mercury sub period. The planet Ketu is housed in his Lagna Aquarius.

Being a Gyana karaka, Ketu placed in Saturn’s house has influenced him with a philosophical bent of mind and outlook in his personality.
From Jan’07 when Ketu started its dasa, his utterances both in public, websites, twitters and blogs are sharp, inquisitive and analytical. He has very well understood the mind of persons around him and would have distanced away from such persons, commitments and work that does not suit his tastes and likings. The planet Ketu and Saturn has given him Acharya, Father figure and an honorable status in the minds of the people.

This year’s birth day coincides with Jupiter sub sub period in Mercury bhukthi in Ketu maha dasa and it would run till 27.11.13. During this period, he will gain still more admiration and kudos from his fans and admirers. Any film and publicity material released during this time with Bachhanji in the lead will fetch both monetary gain and world wide acclamation. Even persons who were ill disposed with him will look at him with reverence. Visiting temples and seeking blessings of elders may be beneficial. The health in this period may face stomach upset and related problems. As he is also running Sade sati for his Libra Moon sign with Saturn in Janma rashi may give frequent moments of anxiety, monetary losses, differences with co born, physical setback for wife, upset over professionally things moving at a slow pace etc,. However the Saturn is under check from benign Jupiter which aspects it from the ninth house will minimize the damages till May’14.

The sub period of Saturn in Mercury bhukthi of Ketu dasa will run till 24.1.14 and with this Ketu dasha comes to end. In this period, he should take care of his legs and be careful while walking over slippery floors and climbing stair cases. He should take his spouse or a confident person who knows about his health condition while going on foreign tour or to places outside Mumbai. There is a likelihood of getting into sudden physical discomfitures during the tour.

The Venus dasa starts from 25.1.14 and its sub period and sub subperiod runs till 13.7.14. Being a yoga karaka for Aquarius ascendants, Venus will give further fillip and glory in the professional field. An unnecessary legal or conflicting opinion may roam around regarding property matters. But this in no way shall affect his reputation and admiration for him. The case and this matter tend to vanish as it appeared. However it may cause mental agony for the family members but Bachhanji will not take this matter seriously.

The Sun subperiod in Venus bhukthi in Venus sub period will 13.9.14 may indulge in anxious moments in spouse health and may put him in an embarrassing position with certain Govt. agencies dragging him into some legal tussles. Bachhanji will handle these affairs amicably as he has done facing similar matter earlier.

Health related matters for the period under review:  In general no major physical constraints are slated during this period but occasional discomfiture may arise hindering his work schedule. He should plan his program allotting more time for rest and relaxation. Caution is required while taking a stroll, walking over slippery floors and climbing unfamiliar staircases.  Be careful and avoid falling down and fracturing hip and legs. The stomach related upsets may arise and necessary precaution to be taken to overcome this discomfiture.

The completion of 72nd year in Oct’14 will give him a sense of satisfaction over his achievement in the professional field and may feel grateful to the people world wide who adore and love him as a member of their family. He has imbibed courage, perseverance and guts to overcome and face any challenges in life which may surface for the rest of his life.