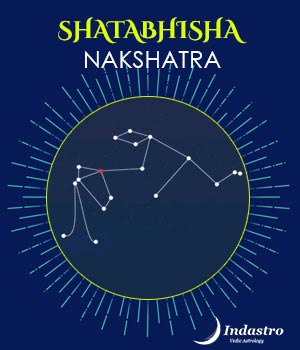 Shatabhisha Nakshatra is the twenty-fourth Nakshatra in the series of the lunar constellations or Nakshatras in Vedic Astrology. All four quarters or padas of this Nakshatra falls under the zodiac sign of Aquarius. This Nakshatra is connected to medicine and healing abilities and since the word ‘Shat’ means a hundred, it also signifies multiple ways or perspectives to look at a situation and find solutions.

Empty circle as a symbol of Shatabhisha Nakshatra signifies avoid or empty space. The natives of this Nakshatra have the innate ability and interest to explore the mysteries of the Universe and delve deep to find out the secrets of the unknown. It also refers to limiting oneself to boundaries or restrictions. They are secretive people and are focused on the hidden aspects of life. This Nakshatra also translates to a hundred physicians or hundred healers which signifies a strong connection to healing arts.

People born under Shatabhisha Nakshatra are highly philosophical, mystical and secretive. Their logical and analytical abilities are very strong and their scientific approach makes them visionaries. At times, they come across as introverted, eccentric and reclusive. They prefer solitude, which might lead to depression. However, they have the ability to think out of the box and find out unconventional solutions to fix a problem. They are truthful, perceptive and have a deep interest in esoteric subjects such as astrology, space research, astronomy, herbs, medicines etc. If Jupiter is in good dignity in the birth chart, such natives are optimistic, philanthropic and enterprising while the influence of Saturn gives practical and serious nature.

To know which Nakshatra you have been born into, sign up so that you can find it out and then go through the descriptive details, to know yourself better.


Know in detail about Shatabhisha Nakshatra:

Graha Devta is the one who gives the ability to understand the nature of the planet so that we can work based on that planet in our chart. Based on Vedic Astrology, the Graha Devta or Ruling Planet for the Shatabhisha Nakshatra is the Rahu, which gives the natives of this Nakshatra a sharp mind, independent nature and curiosity to get to the bottom of things. They are highly imaginative and creative and do well in working on live and research based projects, wildlife photography, drug and pharmaceutical fields, aeronautics, exploration etc. They have a strong liking for travel and adventure.

The Adhi Devta gives mental clarity about the ruling planet and through them, we can come in contact with the divine energy source of the planet. The Adhi devta of Shatabhisha Nakshatra is Varuna. As per Vedic scriptures, Lord Varuna is known as the God of rain and is depicted pouring his healing waters on to humanity. He is also known for his mystical powers and illusion. He was one of the forms of the Sun. Natives born in the Shatabhisha Nakshatra have invincible power, strong principles and a sense of justice. They have a sharp memory and are skilled in writing, which makes them good writers and editors.


Presiding Deity of Shatabhisha Nakshatra (Pratyadi Devta): Goddess in the form of river

Pratyadi Devta helps us understand the function of the Nakshatra and the planet in our birth chart, and has total command over the functions related to the Nakshatras placed in the birth chart. The presiding deity of Shatabhisha Nakshatra is goddess in the form of river. The natives of this Nakshatra are emotionally controlled and able to find happiness within themselves. However, at times they could feel unstable, intensely restrained and frustrated. Worshipping the Goddess in the form of river could be beneficial for peace of mind.

Gender of any Nakshatra is used in Vedic astrology for matchmaking but if we deeply analyze this, we come to know a rather fascinating fact that the gender signifies our mental inclination towards material things and how we manipulate life’s challenges for our survival. The gender of Shatabhisha Nakshatra is Neutral and natives of this Nakshatra are bold, hardworking and courageous. They have a charitable nature and humanitarian outlook.

Dosha represents which type of disease will affect the native. Shatabhisha Nakshatra natives are dominated by Vata. Vata is related to air, which gives diseases related to breathing, heart-related issues, muscle pain, stomach pain, etc. The natives of this Nakshatra should be careful of their health as at times their illnesses are difficult to be detected and correctly diagnosed which leads to delayed healing.

In Indian philosophy, there are three Gunas, known as - Sattwa, Rajas, and Tamas. These are known as the three processes that build a successful life. The guna of Shatabhisha Nakshatra is Tamasic which could give negative traits like fear, lack of self-confidence, instability, depression and problematic relationships to the natives of this Nakshatra.

Shatabhisha Nakshatra is governed by the Ether element. Ether represents the divine silence, where all the creation happens. Ether element gives the ability to have new ideas and inceptions. Natives of this Nakshatra are ambitious and creative.

Birds are the highly spiritual creatures, which came into life to give us the message from the universe. Each Nakshatra has a particular bird symbol, which shows us that the energy related to that bird is residing within us related to that particular constellation/Nakshatra. The bird symbolic to Shatabhisha Nakshatra is Raven. Natives of this Nakshatra are insightful, introspective and have good maturity and decision making abilities.

The first letter of the name also produces a vibration, which is connected with the individual, as per the Vedas. It is advisable to choose a name with the letter that creates harmony between the human and the Universe, so that the native gets every happiness and success, promised in his birth chart. This is akin to us coming in the network coverage area of the Nakshatra we are born under, and thus getting a proper signal from it, which helps us rejuvenate and connect better with the world.

The first letter for a baby born in Shatabhisha Nakshatra could be Go, Sa, Si, Su.