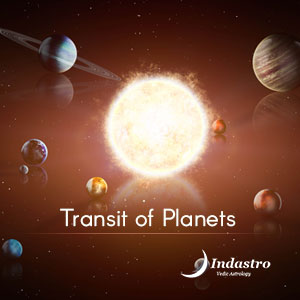 The position of planets at the time of a birth is crucial to make accurate Vedic astrology interpretations. However, life is not still. It changes because planets continue to move at their respective speed. Vedic astrology predictions are based on the analysis of the position of planets at the time of birth as well as patterns they make due to constant movement in the celestial sphere. It is imperative to study how these planets move so as to interpret how they would affect our life.

Like earth, each planet is moving at a certain speed in the sky in the cosmic sphere. In astrology, as seen from Earth, the band of constellations in which all planets seem to move including Sun and Moon is called the zodiac belt. It is an imaginary belt of 360 degrees and is called the zodiac cycle. This zodiac belt is further divided into 12 equal parts called zodiac signs. Throughout their journey, planets move through different zodiac signs. When a planet moves from one sign and enters into another, it is called a planetary transit.

Ancient Vedic astrology is equipped with lots of means through which we can analyze the impact of these transits as well as work out remedies to mitigate any negative influence of these transits on life. Transit means transformation, and any cosmic change is said to cause a shakeup in life. Whether the transit brings positive or negative results depends upon which sign and house it is moving into and whether there is any affliction or not.

The results of planetary transits can be felt at different times in life because some planets change sign quickly while others take years. For instance Moon only takes 2.5 days to change sign, whereas the slow moving Saturn occupies a sign for as long as 2.5 years. If the transit takes place in a positive sign and house without any malefic influence, the person experiences positive changes in life. However, if there is affliction, some negative influence can be observed too. Planets like Saturn, Jupiter, Rahu and Ketu spend a lot of time in a sign before transit, which is why their transition becomes important astrological events.