Understanding the houses in Vedic astrology 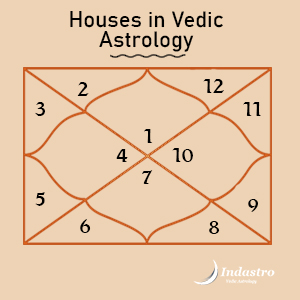 The celestial sphere is divided into 12 equal parts of 30 degrees each. Each of which represents a zodiac sign. There are 12 different signs. Wherever you are born on earth, there is a local horizon, the line where earth and the sky meet. The whole zodiac belt seems to ascend from eastern horizon and descend to the western horizon due to the daily rotation of earth around its own axis. At a particular place and time of birth, the exact point or the degree of the sign that is rising on the eastern side of the horizon is considered to be the starting point of the houses division, it is also the Ascendant. This is because Sun rises from the east and the rising of Sun means new beginning.

Now note that you can only see 6 houses at any location on the earth as rest of the houses are below the horizon. From the starting point on the eastern side, the 1st house is followed by the rest of the houses in anti-clockwise motion so you never get to see the 1st to 6th houses in the skies. The point which is exactly above your head right now is the starting point of the 10th house for someone born right at this moment at your location. The point that lies on the horizon on the west is from where the 7th house begins. 4th house begins from the point which is exactly opposite to the point of 10th house, so naturally it is not visible in the sky as it is below the horizon.

The 1st, 4th, 7th and 10th houses are the pillars upon which the strength of the horoscope depends. These are the four pillars of your horoscope, lying on the horizon and meridian plane. These are called Angular or Kendra houses. Each house governs some particular aspects of your life. The anti-clockwise motion of the houses also symbolizes your lifecycle, starting from the first house that represents birth and personality to the 12th house which stands for death and emancipation.

The placement of different planets in houses based on their movement in the sky at the time of birth tells which aspect of your life is being affected & how. These houses not only govern your life but also tell a lot about your friends, family and relatives.

The very basis of interpreting a horoscope is about understanding the connection between houses and the signs and how the planets influence this connection. The detailed overview of each house and the dimensions of your life covered by each one of them is covered in the subsequent pages.