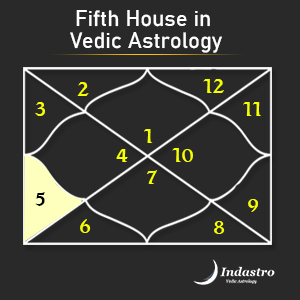 It signifies your mental intelligence, the capability to create and innovate, bring novel ideas to old concepts. All forms of creative expression are ruled by this house including arts and writing. The good karma you performed in previous lives and how it manifests in the form of your artistic abilities can also be seen through the fifth house.

This essentially is the house dealing with everything you create, including children. Your capability to have children, progeny possibilities, conception, miscarriage, relationship with your children, and their health is all governed by the fifth house in the horoscope. Raising your children, who are an extension of yourself, is also a source of pleasure. It also suggests the birth of a son, which is why it is called Putra Bhava in Vedic astrology.

While the fourth house relates to conventions and traditions, the 5th house in astrology is about innovation and expression. It relates to personal pleasure than social pressure and social inclinations than familial responsibilities. It thus deals with your penchants, accomplishment, and creative pursuits, all that gives you emotional satisfaction and a sense of fulfillment in life. The games you like to play, entertainment, recreation, and even your love affairs come under the sphere of this house.

The relationships you indulge in and whether you are successful or not is also governed by the fifth house. It rules your indulgence in illegitimacy, affairs out of wedlock, illicit relations, illegitimate children, and attraction to opposite-sex too depending upon the planets in the house and the position of 5th house lord.

The fifth house in Vedic astrology also rules your sense of discrimination, rationalization, mental intelligence, and analytical skills. Coherence, righteousness, process, and chances of higher education, spiritual learning, and pursuits are all ruled by the 5th house.

The fifth house in the horoscope is also related to good luck and fortune, your indulgence in speculation and investments. Your luck in gambling and matters involving the risk of money can be assessed by reading 5th house. All games and speculative affairs where chance plays a role come under 5th house signification such as puzzles, socking, shares, sudden gains, racing, lotteries, betting, dice, casinos, cards, etc.

The fifth house in astrology relates to Leo, the fifth sign in the Zodiac cycle. Jupiter is the natural significator of this house, which also relates to good luck, fortune, learning, and wisdom.

The body parts that fifth house rules include the stomach, upper and middle back, pancreas, and spine.

The fifth house in mundane astrology is thought to represent the population and birth rate of the country.

The fifth house also represents the ambassadors and national affairs of a country, especially relating to entertainment, education, youth, and sports.