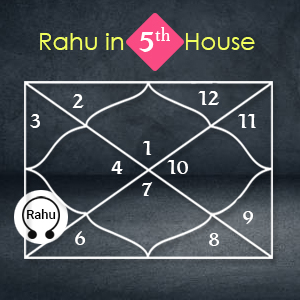 
Rahu in this house may make you indulge in love affairs on many occasions. Romance will always be a part of your life and such relationships may play a major role in the way you lead your life, impact other facets of your life and your other connections. Your love deeds will be intense and there may be several occasions for bed pleasure.

The 5th house is connected with love, romance and such relationships, sexual intimacies and bed pleasure. This house also reveals your creative sense and its impact on your activities. This house depicts the happiness which you may experience in your life and your actions to achieve them. Your creative talents (such as acting and singing) are also governed by this house and your inclination towards playing games and sports will be controlled by this house. Speculative activities in finance are also influenced by this house.

This placement of Rahu will bless you with immense gains in speculative investments. You will have the skill to identify correct financial instruments for investment opportunities, which may give high returns and enhance your wealth. There is a likelihood that you may even pursue this as a profession and would be very successful.

Your skills in acting and dramatics would be very good; and this may also turn out to be a very successful and progressive career option for you. You may be motivated to perform well, which will be supported by your creativity.


A positive Rahu in the 5th house may bring good coordination and relationship with your children, you will share a good understanding with them and look after their needs. Your creative skills may have an impact on your routine life as well. It may bless you with a good and high status in your social circles.


A negative Rahu in the 5th house may lead to some differences in your marital life. Your speculative investments may at times see reduced profits if invested without thought and analysis. You may carry the fear of missing out on opportunities or losing your status. Overindulgence in several love affairs may create some issues in life.

Some notable sign placements for Rahu in 5th house