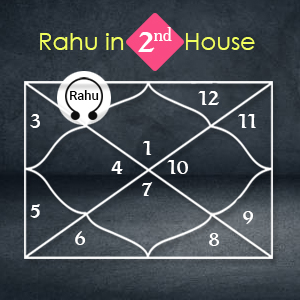 
Rahu in 2nd house is bound to make you very wealthy and would bless you with immense wealth which may be earned by you or even inherited. You may be inclined towards growing your wealth manifold, buying all luxuries and comforts for you and your family. This combination also gives you a high position in society.

The 2nd house is regarded as the house of family, relatives and your relations with them. It also depicts your accumulated wealth and possessions (house or land, property, car, ornaments, precious metals, etc.). This house gauges how much you value yourself and your self-respect. Your hidden talents are also revealed by this house.

Here, Rahu blesses you with deep connections with your family and there will be intense feelings. However, this also brings some distance from your family, which may be due to your official commitments or transfers in job. This may lead to some stress in family life, however, largely, things would be under your control.

Rahu may also motivate you to gain some knowledge about cultures and traditions which carry lots of historical value. You will be a true follower of traditions, customs and cherish them. Learning new languages and exploring varied places would bring lots of satisfaction to you.


A positive Rahu in the 2nd house brings ample opportunities to accumulate wealth and property. This will bring you good contacts and connections in society, you will know people with high prestige and position. You will have a deep inclination towards your ancestors, traditions and customs, and take all actions to nurture and absorb them.


A negative Rahu in the 2nd house may make you prone to unwanted and huge expenses. You may develop many enemies who may create unnecessary troubles in life every now and then. Some legal complications would be an area of concern for you. Minor health issues will also be there which will keep troubling you.

Some notable sign placements for Rahu in 2nd house