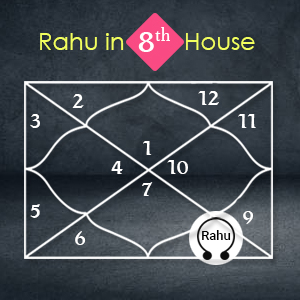 
Rahu in 8th house gives mixed results for you as this placement is generally regarded as less auspicious. You may be inclined towards secretive aspects, indulge in such activities and explore options of working as a secret agent or with some intelligence service. You may not reveal your inner feelings to others. Keeping secrets will be your best skill.

The 8th house is associated with sudden events and accidents. This house also governs the inclinations towards occult sciences and black magic, you may tend to study these aspects and may even take them up as a career. This house signifies your intense desires for sexual activities. Among other things, this house is associated with the death and the way a person dies. This house also deals with secretive attitudes, hidden aspects of a person’s life, tendencies and inclinations to be secretive or take up a profession related to secrecy.

Rahu here blesses you with good wealth and financial status, and windfall. Your inclinations towards accumulating wealth will be complimented with your new ideas and means of earning money. This position also makes you innovative in all aspects of life. Your creative skills would lead to great new concepts that bring you name and fame; your out-of-the-box thinking and ideas will boost your career and professional prospects.

You may be inclined towards black magic and occult sciences, may like to explore and research on these subjects to gain deep knowledge. This may even become your career option and take you on a different journey altogether.

This position also indicates that you may have to face some legal complications in life, or may get involved in litigation or some court case that would bring adverse outcomes and stress for you. Better for you to stay away from confrontations as it may put you in deep trouble.


A positive Rahu in the 8th house may bring good financial gains in life. It may help you develop good contacts and connections with people who are highly placed in society, are intelligent, well-educated, and respected. You may be inclined to pursue research in the field of your choice and will do very well in such activities.


A negative Rahu in the 8th house may lead you to some secretive and illegal means of earning which you may hide from others; some legal complications in life that may bring a bad name for you and tarnish your image in the social circles. Your relations with your in-laws may not be very smooth and there will be differences of opinion. Some stress in marital life may also be experienced.

Some notable sign placements for Rahu in 8th House