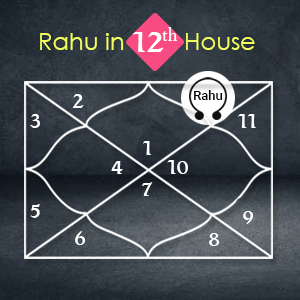 
Rahu in 12th house will draw lots of appreciation for your work and efforts, people’s admiration and a good image in society. Your career will get a boost with this, and your prosperity would enhance through your connections in foreign lands and if you pursue your goals there. This position will fetch you a good name and fame, however, if you do not safeguard your image then there are chances that some unfortunate events or circumstances may hamper the good work you are doing and the respect you have in society.

The 12th house is the house of salvation, losses and hospitalisation. This house also reflects your expenditures in general and the ones specific to hospitals. This house displays your connections with your past life and the habits that you have carried over in this life. Your spiritual inclination can also be analysed from this house. The way you improve yourself is linked with this house as is the hard work that you put in all the activities.

You will enjoy a good love life with Rahu in the 12th house. You will share a good bond with your love partner and indulge in activities related to bed pleasure. Married life, on the other hand, may see some ups and downs due to some misunderstanding between the couple due to trivial issues.

This placement of Rahu also brings expenditures which may create some disturbance in your finances as these will be unplanned and unexpected. Hospitalisation for your illness or of some relative may result in expenses, however; because of your good earnings and wealth there may be no issues in handling such expenditures.


A positive Rahu in the 12th house will motivate you to spend money on charitable deeds and also for spiritual cause. You will be kind towards the needy and your selfless service will prove very helpful for them.


A negative Rahu in the 12th house may bring unexpected and unplanned expenditures for you, which may create financial problems. You may indulge in activities involving false claims that may tarnish your image. Some health issues may trouble you.

Some notable sign placements for Rahu in 12th House