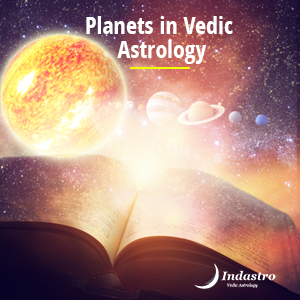 All planets in solar system are revolving around Sun in a predefined pattern. That’s how we know when to wake up and when to go to bed. Planets however govern a lot more than just occurrence of day and night or eclipses and tides. Planets have a direct impact on us, despite being several light years away. While the position of planets does not dictate our everyday actions, it does have a profound and close influence on our life and destiny.

Much like nobody forces Moon to orbit Earth, humans are also under no force to act in a certain way but everything in the universe is correlated and works in sync so naturally, the movement of planets affects our actions as a result, much like our actions affect the environment. Human body is in fact made of elements present in the Universe. The structure of our brain is very much similar to the structure of universe. Everything that happens to the Universe happens to us. Our own magnetic field aligns with the Earth’s magnetic field. Each object in the Universe, be it humans, Earth, planets and stars in our galaxy move in a precise symphony so we have to connect ourselves to these energy sources to receive the vibrations and function better.

Each planet emanates certain energy while moving through the zodiac circle. Some planets move faster like Sun, Moon, Mercury, Mars and Venus, these are called inner planets and they affect us in a more personal and rapid manner, influencing our daily life, impulses and mood. The outer planets move slowly in the sky, some even take as much as 2.5 years to change a sign. These include Jupiter, Saturn, Rahu and Ketu and these planets have a more profound and long-lasting impact on us, unlike say Moon.

Every planet rules a zodiac sign except Rahu and Ketu, which are in fact not actual planets but two reference points in the sky. Rahu and Ketu are the points where the paths of the Sun and Moon intersect with each other. Rahu is the north lunar node, the Head of the dragon as per mythology and Ketu is the south lunar node. The qualities of the zodiac signs somewhat align with the characteristics of the planets. For instance, impulsive and active Aries is ruled by fiery Mars, dreamy Pisces is ruled by spiritual Jupiter, emotional Cancer is ruled by motherly Moon while confident Leo is ruled by masculine Sun.