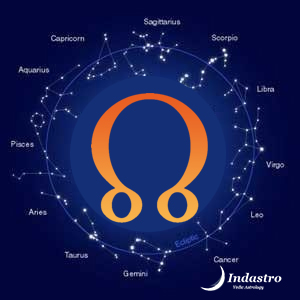 Rahu planet is a reference point in the sky, not an actual planet like Sun or Mercury. Despite not having an actual physical presence, its impact is deep and powerful.

When Rahu is negative in a horoscope, it causes dissatisfaction, materialistic tendencies, fears, distorted mental makeup, and fantasies. Rahu & Ketu are the shadowy planets in Vedic astrology.

Just as Ketu, Rahu does not have a physical shape or mass like a planet. It is a point in the sky, where Sun’s apparent path intersects with Moon’s track in the celestial sphere when moving from the North to South direction.

On the other hand, when Moon intersects the ecliptic during its movement towards the North, the point of intersection is called Ketu.

These points are not still in the sky, there is a slight movement in their position on an annual basis, approximately 19 degrees and 30 min.

Rahu is called the North Node of the moon and the head of the dragon in Hindu Mythology. It takes around 18 years to complete its revolution around the zodiacal circle and stays in each sign for about 1 ½ years.

Significance of Rahu in Hindu astrology

As per Vedic astrology, Rahu relates to unconscious desires, ambition, pleasures, fear, and uncultured behavior. It works much like Saturn and can bring unexpected losses, misfortunes, failure, and frustrations in life.

This planet is animalistic in nature. It awards the person with worldly comforts, unexpected success, gains, riches, power, and strength.

When Rahu is positioned positively in a horoscope, it gives victory over enemies and opposition too. But the problem is that there is always a sense of dissatisfaction.

Rahu makes you never satisfied with your ambitions, gains, success, money, and lifestyle. There is an insatiable hunger for more. It drowns the native into unconscious desires, which he is unable to comprehend but relentlessly pursues. This leads to addictions, obsessive behavior, overly ambitious nature, unrealistic expectations, and fantasies.

Rahu in astrology is strongly associated with occult sciences. Also to the dark side of human character. It is revolutionary in nature, stands against the norms and conventions. It represents the illegal and the dark.

The element of foreign also comes into play. Rahu also relates to spiritual energy quite conversely. It gives knowledge of the higher aspects of life, the occult and spiritual. It gives strong intuition and an in-depth understanding of psychology.

Rahu is a reference point in the sky, not an actual planet like Sun or Mercury. Despite not having actual physical presence, its impact ...

Transit results of Rahu are found to be positive in the 3, 6, 10 & 11th house of horoscope. It is a shadow planet, an imaginary point in the sky but its

Rahu Mahadasa runs for as long as 18 years. Rahu is a shadow planet and is considered malefic. However, its dasa also brings positive changes in life...

Vedic Remedies to bring down the ill effects of Rahu can work well. Rahu is considered a malefic planet by nature. It doesn’t rule any sign. It shares a