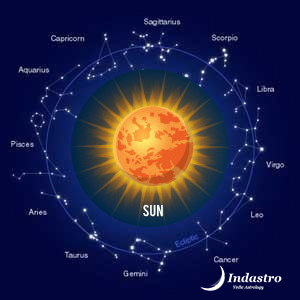 Sun is a luminary, a star that shines bright enough to light the whole world. Without its heat and light, we are nothing but an ice-ball. Sun is what shakes things up; it is the life giving force. Its energy is profound, and decides whether you become a radiant smiling face or hide behind the clouds of ego and aggression. Sun in Vedic astrology represents the Soul. It is the representation of your outer self, of how you project yourself to the world and what makes you stand apart from the rest. It is the crux of one’s identity and how it is preserved. It is the courage and confidence you employ to fight off the everyday challenges.


Sun is the biggest celestial body human being is aware of. It is the center of the Solar System and when it comes to its composition, it is a giant ball of plasma, primarily made of hydrogen and helium. It is 149 million km far from Earth yet its influence is most profound on human being compared to other planets. Sun is stationery thus never turns retrograde as everything else in the universe revolves around it. Sun in Vedic astrology terms spends a month in each sign and takes around a year to complete its circle of the whole zodiac and the 12 signs.

Significance of Sun in Vedic astrology

Sun in Vedic astrology occupies the position of king due to being at the center of it all. Being our natural father, it stands for all the masculine influences in one’s life including Father, husband, and male children. It is the king so represents authority and relation with government too. While Sun represents our innermost self - the soul, we as individuals tend to only manifest the outer self or ego. It gives the natives the ability to lead, desire to earn name and fame, an ambitious attitude, optimism, and a strong will to tackle challenges effectively.

Sun in astrology is also considered to have a regal air so it rules royalty, state and the higher positions as well. It also signifies good health, vitality and wellbeing. A strong Sun in horoscope indicates a person with leadership qualities. Such a person usually enjoys a higher position in society and shares a cordial relationship with father. Native with positively placed Sun is also dependable, generous, and mature.

This fiery planet can be detrimental to health if negatively placed causing baldness, headaches, weak eyesight, blood circulation related problems, bone weakness, and heart problems. A weak Sun in horoscope can also affect one’s relation with father or cause problem to father. Natives with weak Sun usually suffer from low stamina, self-esteem, and indecisiveness. Too strong Sun can result in a domineering or aggressive personality. Such a person may be self-centered and someone who always seeks to be at the center of all action.

Medical astrology is an evolved branch of Vedic astrology that can forewarn about your immune and health...

Gemini Health And Fitness in The Year 2021

Planetary combinations for Cancer and what are the astrological indications that can help diagnose the disease...

Each of the 12 zodiac signs represent a body part. Presence of a malefic in that sign can mean anything from a

Your general constitution & basic health, combinations that cause ailments & hold back good health and health

Career evaluation by way of a timely ‘check’ on the health of your career is very important. This check