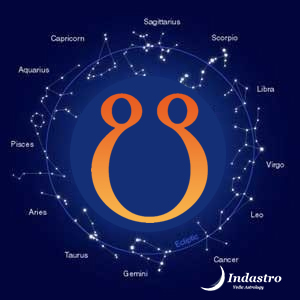 Ketu in Vedic astrology is a Chhaya Graha, a shadowy planet. On one hand, Ketu relates to Karma, gives the results of the deeds you performed in past life and on the other, it relates to spirituality, liberation, and mastery over occult and mysteries of life.  It is the planet of detachment; it takes away things. But there is a deeper meaning to what we have said here. Rahu stands for materialistic tendencies while Ketu is about pure detachment and liberation from the illusionary happiness of life. When negative, Ketu can cause mental disorders, strange tendencies, lunacy, derangement, anxiety, strain, criminal tendencies, and so on.

Ketu is not an actual planet. It is a reference point in the sky, which does not have a physical identity but is like a black hole. When Moon is moving on its course from South to North, the point where it intersects with the ecliptic, the Sun’s apparent path that point is referred to as Rahu. And when Moon is on its southerly trail, the point where it crosses the ecliptic is called Ketu. These two points are not stationary but moving steadily, around 19 degrees and 30 minutes annually. The complete revolution around the Earth takes as much as 18.5 years. Ketu in Vedic astrology is also called the South Node of the Moon and in Hindu mythology, it is referred to as the tail of the dragon as the story goes.