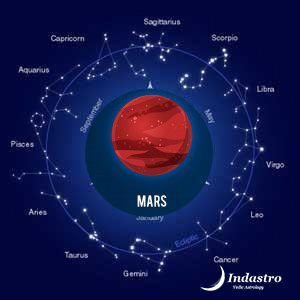 Mars planet is a fierce red-hot planet and its energy cannot be contained. This energy needs to be released, usually through actions and physical means.

Mars helps us take up challenges, fight head-on, and win despite the odds, with courage and a competitive spirit. It represents all forms of physical energies, including sexual.

This is the planet that commands you to rise and do something about your life than waiting. It seems that the phrase “actions speak louder than words” was derived keeping Martian energy in mind.

As per astrology, Mars planet certainly helps to start something from scratch and make it into something big, and all due to the spirit and ambition it imbibes in the person.

Mars in Vedic astrology is synonymous with power. It gives you the drive to win and become the best, be it at work or playfield. However, keep in mind that Mars makes you warrior-like, not war-like.

Its energy can be both constructive as well as destructive, depending upon how it is used and where Mars is placed in a horoscope.

Mars planet is a hot, fourth from Sun, and appears to be red when seen from Earth. It is about 56 million km far from Earth. Mars revolves around Sun and completes one revolution in 687 days.

Mars turns retrograde, appears to move backward from Earth. Its retrogression period is about 60 to 80 days and takes place after around every 26 months.

Mars takes around 45 days in each sign and nearly two years to complete its circle of the whole zodiac belt.

The signification of Mars in Vedic Astrology

With fire as its element, Mars in Vedic astrology is a masculine planet signifying strength and supremacy.

Mars in horoscope can be both positive and malefic depending upon its placement. It can help overcome challenges, topple competition, and win over enemies. On the other hand, its energy can be self-destructive too causing harm, injury, wounds, accidents, and excessive sexual urge to the native.

A well-placed Mars in horoscope can be very positive as it makes the person a saintly fighter. Such a person usually has high values and is a justice-loving soul backed by ambition and fearlessness. They have good control over their aggressive instincts and use them wisely.

People having Mars in Ascendant are usually attractive and look younger than their age. Such a person usually has effective administration and leadership skills.

Afflicted Mars can also make the person ambitionless. Such a person may struggle to focus their energies in the right direction.

Overall, Martians are short-tempered, love to offer their opinion and win arguments, are quite intellectual and technically sound.

In Vedic astrology, Mars placement is crucial in horoscope matching as it causes Mangal Dosha.

Making Vedic Astrology the most authentic, Yoga Analysis helps you to understand the influence of such Yogas to utilize the favorable periods to your ...

Planetary Transits and their effect on your day-to-day life to help us to unravel future forecast trends and development due to these astrological shi...

Mars is your energy, attitude and confidence. Understand interesting facets on Mars...

Mars is like a personal motivator, who gives you courage and the drive to take initiatives in life...

Mars signifies physical strength and confidence in an individual. It rules over the bone marrow, blood and muscles of a human body. When Mars is weak,...

Everything about Mars: Learn Astology

Mars is a fierce red-hot planet and its energy cannot be contained. This energy needs to be released, usually through actions and physical ...

Mars stays in each sign for around 40 days. It brings positive results when transiting into 3rd, 6th, and 11th house from where Moon is posited.

Mars’ Mahadasa runs for a period of 7 years. Mars is the karaka of passion, ambition, energy, aggression and enthusiasm. The major fields it represents ...

If you have a weak Mars in horoscope, results may not be favorable as it is a malefic planet and Vedic remedies are quite effective in bringng down...