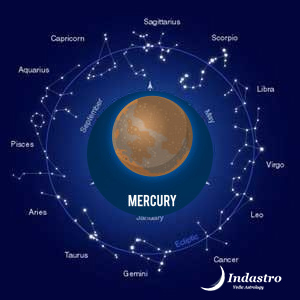 Mercury planet is a neutral planet, rules over your rationality, perception, and opinions. It determines your ability to negotiate, coordinate, think, understand and process information.

It governs your ability to adapt and adjust, to express what is in your mind effectively, and to use diction wisely.

If Mercury is strong in a horoscope, the person is likely to be a good communicator having the power to persuade. This winged marshal of the celestial sphere asks you to put logic into things, speak to your advantage, and bestows us with intellect and rationality to do it all.

When you are Mercurial, there is a tendency to be restless and always in motion. Life happens to you at the speed of light. Transportation, short trips, chat with neighbors, visit friends, all come under the domain of this clever planet. Mercury asks us to explore, both, our inner self and abilities as well as the outer world.

Mercury planet is the closest to Sun in the celestial sphere. Mercury completes one orbit around Sun in 88 days and completes one rotation on its axis in 58.65 days.

When seen from Earth, it never appears to be more than 28 degrees away from Sun. Mercury also turns retrograde for a period of about 20 to 24 days roughly, and retrogression occurs every 4 months.

When retrograde, people under the strong influence of Mercury face communication failures often. Mercury stays in one sign for around 25 days and takes about 10 months roughly to transit through the whole zodiacal belt.

Signification of Mercury in Indian astrology

Mercury in Vedic Astrology is neither masculine, not feminine; it acquires the persona of the sign it is placed in.

Since Mercury gives one the power to discriminate and rule over language, its bad influence affects it to a deeper level. It also rules over youth, play, leisure, sports, and social circle.

Like Moon, Mercury in astrology also represents the mind, but it deals with the analytical side while Moon is concerned with the subconscious.

When Mercury is strongly placed in a horoscope, it makes the person intellectual, wise, rational with effective speech and curiosity to learn. Communication is the strong area of such a person.

But when Mercury is too strong, it represses the emotional side of the personality. Such a person tries to put logic into the situation that needs to be dealt with emotions.

Mercury when under influence of malefic planets, can be both favorable as well as unfavorable for the native. Native having a strong Mercury may have strong intelligence but they may use it in shrewd ways if under affliction.

Such a person usually struggles in social situations due to poor expression and communication blunders.

Love Transit Report is a special reading that predicts your love life and relationships in the given time period. This report concludes...

How your life is changing with transiting Rahu

The transit of Rahu, the dragon's head, over a natal planet is utmost important & life changing. The reason is simple to understand...

At times, a seemingly difficult task gets done with much ease. On the other hand there is a phase of life when everything seems to get ...

Were there stages in life when your cash flow was quite positive while at other times, you had faced challenges with respect to finance...

If you want to be a good writer, then you should have a good Mercury. If you desire to be a successful businessperson, then also your Mercury should b...

Virgo is the exaltation sign of Mercury. How transit of Mercury would affect your Moon Sign, is you are a Virgo Moon....

Understanding the planet Mercury, the planetary conjunctions involving Mercury, professions ruled by Mercury and the personality traits of Mercury rul...

Gemini is ruled by Mercury. It is an air sign and represents communication, logic, thought process, networking, intellect...