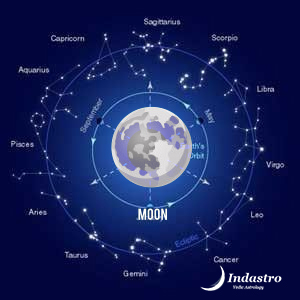 Moon planet is the closest celestial body to Earth, and it has the deepest impact upon human life. In fact, depth is what Moon is all about when it comes to its astrological interpretation.

It is the representation of our inner profundity, our emotions, instincts, mood swings, behavior, and how we feel about things and people.

Moon in Vedic astrology is the silver goddess that caresses us from the very beginning in the form of our mother. It is the representation of femininity, motherhood, care, compassion, love, and sensitivity.

People having a prominent Moon in the horoscope are often emotional beings with a nurturing attitude. Natives with Moon in Cancer often turn out to be the best parents in the world.

It is the natural satellite of Earth and takes around 28 days to complete its orbit around Earth and this cycle is also associated with fertility and femininity.

Moon’s gravitational force is what causes the tides in the ocean, which is also suggestive of our emotional nature, as unfathomable as the deep blue ocean.

It is 3,84,403 km far away from Earth, yet the closest planet to us. The moon never goes retrograde as it orbits around the Sun along with Earth.  The moon stays in each zodiac sign for around 2.5 days.

Significance of Moon in Vedic astrology

Moon in Vedic Astrology is believed to emit calm and feminine energy.  It is the queen among the nine imperial stars and rules our minds and emotions.

This fastest moving planet waxes and wanes frequently, partly the reason for our mood swings and crabbiness.

The moon is what balances the fierce energy of the Sun with its calming and nurturing properties. Moon in fact reflects the sunlight at night to keep us from the all-encompassing darkness.

It also rules over liquids and water, the fundamental needs to sustain in the world and grow. People who are born when the moon is waxing are usually extrovert and bold while those born in the waning Moon are introverted and submissive.

It is the waning and waxing of the Moon that is associated with our emotional temperament, mood swings, climatic changes, oceanic tides, fertility, and menstruation.  Thus, its effect upon human beings is both psychological as well as physiological.

A positively placed Moon in the horoscope makes the person mentally and emotionally strong. Such a person has a good concentration and capability of emotional connection with people.

Natives with strong Moon are usually compassionate and nurturing. They usually think of others’ well-being first than meeting their own needs. Such people are usually connected with their surroundings on an emotional and psychological level.

A weak Moon in the horoscope reflects an emotionally weak person, cries a lot, laughs a lot, and is not in control of their sensitivity. Such a person faces a lot of difficulties on an emotional level due to their temperamental makeup.

They can also face mental distress and problems. Moreover, their health also gets affected. Such people need to live a calm life, away from the disturbances, maybe close to a water body for the most soothing effect.

Since Moon is connected to fertility and bodily fluids, the negative influence of the moon in the horoscope can affect health issues related to blood, lungs, breasts, milk, chest, cough, and reproductive system.