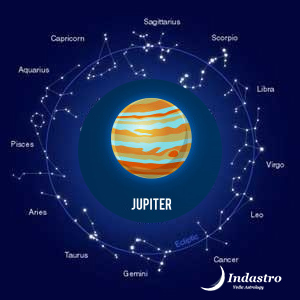 Jupiter planet is the guardian of the thinking person, the ruler of higher intellect, the embodiment of lady luck, and signifies spiritual wisdom. Jupiter represents your ideology in life.

And in spiritual terms, it rules over faith, religion, philosophy, and the search for the ultimate truth of life. Jupiter governs your intrinsic curiosity to find the answers, and explore the world in the process, thus foreign travel comes under the domain of this planet.

Jupiter in Vedic astrology is considered to be the most benevolent of all planets, thus naturally associated with luck, fortune, and wealth. Its benefic presence can turn rags into riches.

While Saturn is the teacher, Jupiter is more of a classmate that helps to grow and sees how you flourish and tread on the right path. It is a judge who assures that you do not forget your values in the process.

While this benefic planet bestows us with wisdom and wealth, at its worst, it can surrender to lethargy, sloth, and indulgence.

Jupiter is the biggest planet in the solar system. The closest it has ever been to Earth is 588 million kilometers. Jupiter has 63 natural satellites as Earth has Moon as its own.

It takes around 11.86 years to complete one revolution around Sun. Jupiter turns retrograde every year, and its retrogression period is about 110 days.

Jupiter takes around 12 years to complete one circle around the zodiac. And it stays in one zodiac sign for around 13 months. Since it takes a long while to transit signs, its impact is often deep and long-lasting.

The signification of Jupiter in Vedic astrology

Jupiter in astrology is the “Guru”, it takes us from ignorance to the light of wisdom. It represents knowledge, spirituality, religion, higher learning, research, philosophy, optimism, and a lot more.

Jupiter in Vedic Astrology is associated with children as well as is the “Putrakaraka”. Jupiter essentially is about ‘expansion’. It expands the area where it is placed in a horoscope.

For example, if it is placed in the 11th house of income and gains, it usually expands wealth and prosperity.

Jupiter is the karaka of affluence, generosity, righteousness, inherent goodness, and wisdom.

Jupiter in Vedic astrology is known to be a giver and is the most generous of all planets as it expands without expectations. Its placement in a chart defines the spiritual views, bent of mind, kind of faith and religion, and materialistic standing of a person.

A strong Jupiter in the horoscope is commonly found in the chart of priests, preachers, teachers, religious leaders, judges, and philosophers.

When well placed, Jupiter in the horoscope indicates success, prosperity, positive attitude, and spiritual inclination, a higher sense of justice and equality, and good relations with teachers.

Such people are usually well-wishers of the whole community. However, a too strong Jupiter can sometimes lead to an overly optimistic person, thus problems in life and spiritual stagnation.

When Jupiter is weakly placed in a horoscope, it makes the person choose the wrong direction in life. Such a person may not get the blessing of a guardian or his or her teacher may be dishonest or contemptuous to him.

People with weak Jupiter generally suffer from a lack of concentration, confidence, and faith. They have a pessimistic view of life and are too materialistic and spiritually blind.

People with the weak placement of Jupiter in the horoscope often face financial difficulties in life. Circumstances clog their mind to be unaware of spiritual calm.

Afflicted Jupiter may also suggest progeny difficulties. Also, it may lead to problems such as obesity, diabetes, and issues related to the liver, pancreas, feet, and hips.