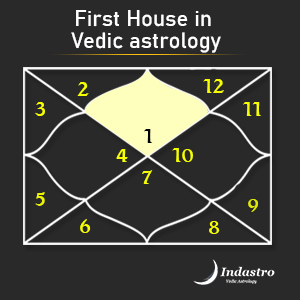 The first house, also known as the Ascendant in Vedic Astrology is called the house of the self. It is the degree of the sign that is rising on the eastern horizon at the time of birth at a particular place on the earth.  From the point of the Ascendant, the rest of the sky is divided into twelve equal parts to form the subsequent houses.

The first house in Vedic Astrology is considered the most important because it marks the beginning of life. It is the first house formed in terms of sunrise, thus refers to the new beginnings and the early environment one gets in life.

The zodiac sign associated with the first house is Aries and the planet that naturally signifies it is Sun. The first house in astrology mostly refers to the head and upper part of the face when it comes to the body part it governs.

In Mundane Astrology, the first house represents the overall state of the country or the people in it. This house essentially answers some key questions about self like who are you? What do you want to do in life? How would you do it?

This underlines the process by which you become a unique individual and realize your truest self. It is the total of our personality, both the inner self and outer shell. The first house thus rules how we grow and gives a shape to how we perceive the world.

1st house in the horoscope represents the personality, physical appearance, character, temperament, self-identity, strengths, weaknesses, physical constitution as well as health. By studying the sign and planets placed in the first house, we can easily decipher a lot about one’s inner and outer self.

The position and strength of the first house lord are very important in carving the destiny of a person. The first house mostly relates to public appearance, how a person projects himself or herself to the world. It is a mirror into how we show ourselves as well as how we actually are.

1st house is called Tanu bhava in Vedic Astrology, meaning the house of the body. This is because the first house is the karaka of one’s individuality, looks, sexual appeal, attraction, bodily features, and strength. It gives a clear picture of your vim and vigor, and overall health and wellbeing.

It is a window to your general outlook towards life, which largely affects your choices and future course of events. Moreover, its astrological analysis also tells about upcoming misfortunes and mishaps. The first house in Vedic Astrology thus is very important in terms of making astrological predictions.

Vedic Astrological Analysis and Reading your Birth Chart Using the traditional knowledge of 5000 years ago, to know and plan a better life.

Guiding light for your Career and Finance Benefit to help you to tide over the competitive and challenging career ambits for your true potential.

Astrology of Love, Relationship and Compatibility to help you to assess the potential of romantic relationships through different levels of love.

Predictions about your Family and Children to prepare you for a more equipped and fulfilling family life and encourage smooth sailing.