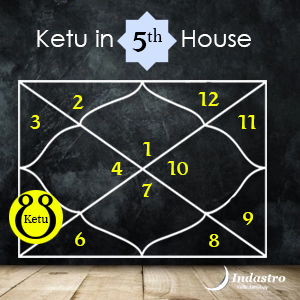 When Ketu is located in fifth house, the native usually has a philosophical bent of mind. Such a person is quick to learn new languages. In fact, native is usually fluent in many foreign languages too. This placement of Ketu also increases one’s inclination towards matters concerning religion and spirituality. The person also has an affinity to indulge in research. Ketu in 5th house also gives knowledge of occult sciences and in some cases, black magic too.

Lack of emotional satisfaction persists in the life of native when Ketu sits in fifth house, especially under affliction. This position is not favorable for children of the native. They may face hurdles in life. It also causes problems in progeny possibilities and in some cases, it may lead to abortion or miscarriage. Ketu here is also unfavorable for one’s own health as the native might suffer from stomach related diseases. Nevertheless, chances of gains from speculation are likely to the native.

What is the position of Ketu in my birth chart? Login or sign up