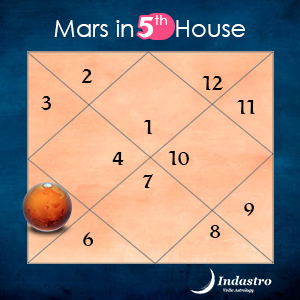 This placement will enhance your creativity and hidden talents; but because of your high expectations and proud nature, you will not be able to make your name in society. It is a dharma trikona house where you are inclined to follow the virtues, but Mars posited in this house will not allow you to follow good morals. You might get attracted towards the opposite sex and have multiple affairs. This attitude will destroy your domestic life.

You can become a politician and manage power successfully. You will be able to manipulate power and accumulate wealth by using it in a wise way. But the purpose of serving will be defeated as Mars is the significator of power.

This house also makes one speculate and earn financial gains from various sources. But this position will aggravate your inner anger and will create restlessness. It will expand your firmness and rigidity. You will pick up fights if profits are not achieved.

5th house, being a panaphar house, will bring struggles from the age of 30 till 60. You will have to be careful and take your decisions wisely. Mars will not allow you to overcome your anger. 5th house is also the house of pleasure, leisure and entertainment; and Mars in this house ties a relationship together. But Mars, being a ferocious planet, will hamper the understanding to maintain a harmonious relationship and will lead to conflicts and disagreements in a relationship. Your thoughts and ideas will clash with that of your partner’s. Both of you will have differences of opinion and might not lead a peaceful life.

Mars in 5th house enhances your sexual drive. This house is mainly considered with childbirth and pregnancy. In this house, if Mars is placed in fertile signs like Cancer, Scorpio and Pisces, then there is a high probability of bearing a child. Mars in infertile signs like Aries, Gemini, Leo, and Virgo will not support progeny. Rest of the signs are indecisive signs in this regard. We need to consider the Kshetra sputa and Bheejha sputa points for the parameters to beget children.

A positive Mars in the 5th house will get you a high rank in studies, will gear you towards success and help in discovering hidden talents. You will have a childlike spirit and show great interest in sports. You will be romantic, admirable and parents will shower their love with realistic expectations. This house will give you a good appetite. You will be a voracious eater with good digestion.

A negative Mars in the fifth house can cause abortion and create problem with children, result in poverty, wickedness, sinful deeds, evil-mindedness, and an angry disposition. Denial of progeny and the count of Bheejh sputa will also be affected. You will not be able to utilise your talents properly because of your temperament. Mars will make you less sensitive and less responsible when it comes to relationships with family members.

Some Notable sign placements for Mars in 5th House

Retrogression of Mars in the fifth house may not allow you to continuously engage in jobs despite your best efforts. But then a beneficent retrogression can bring money and success in various fields of science and engineering.

Combustion of Mars makes you hard-working, but you will not be renowned for your work. Your short temper and authoritative way of doing work will destroy your success.