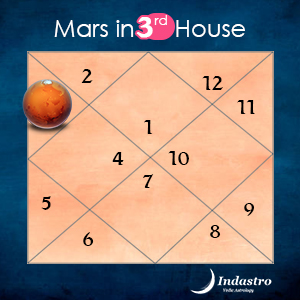 Mars in 3rd house signifies siblings, short travels, writing, and studies. This placement makes you aggressive and brings you immense energy to multitask and learn many subjects. It also makes you direct in speech, without a filter in communication.

Due to your argumentative nature and aggressive energy, you get disheartened quickly if things do not work out as per your expectations. This might lead to psychological imbalance. This can also disturb the relationship with siblings and create sibling rivalry or denial of brothers.

The position gives you the courage, drive and capacity to acquire wealth through hard work, but when it comes to communication, you will speak your mind in a shrewd and abrupt manner, which will not be beneficial in any profession or business.

The 3rd house represents your subconscious thinking pattern, mental health, learning capacity, and planning skills. When Mars is posited in this house, it elevates the inner weaknesses and ferocity and creates havoc from inside, which disturbs your mind and well-being. Mars, being a fast-moving planet, will make you take hasty decisions, which will create problems.

This is also the house of sexual urge and Mars in this house may drive you to take steps against social norms. You will get into multiple relationships with the opposite sex and spend much time and energy on sexual activities. As 3rd house from lagna imparts a high degree of courage and determination to your belief system, you will not care about breaking rules and going out of the way to fulfil your desires.

If Mars is afflicted, you can develop suicidal tendencies, bone fracture and blood poisoning. If Mars is associated with Rahu, then you may desert your spouse and deceit your brothers. There is also the danger of accidents from travel. You will face trouble from neighbours.

You will be handsome and robust, fortunate and a good sportsperson if Mars is exalted. If Mars conjuncts with Sun and Moon, you will have knowledge of machinery, will be brave, overpower your enemies, and will be expert in any kind of work. But this will also make you sinful and barefaced.

A positive Mars in the 3rd house makes you expand your inner strength by meeting many people and gaining knowledge in your field. You have the capacity to think out of box which will benefit you professionally. You love travelling and adventure.

A negative Mars in the third house makes you debate in a bold and brash manner, that can get you caught in controversies. You will not hold yourself back from arguing and your attitude is simply driven by the desire to win. Too much adventure and travelling might increase chances of fatalities and accidents. Your dominating nature might bring disharmony in your domestic life.

Some Notable sign placements for Mars in 3rd House

Retrogression of Mars in the 3rd house makes you vulnerable and daring. You will go against all social norms and laws to fulfil your desire. It can make you spend a lot of your time and energy on sexual activities.

Combustion of Mars aggravates your inner anger and resentment as you have the energy and will to achieve your desires, but your inappropriate communication and planning creates blockages. This makes you frustrated and irritated.