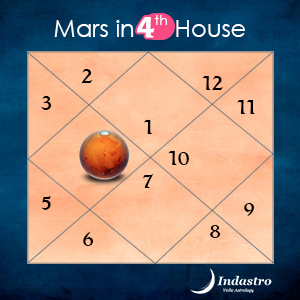 4th house is the most important house in astrology as it is about your happiness, mother, luxury, and tangible assets. Mars is the planet that provokes and tests your limits to the extent you can control your temper.

It is the planet of bully so this position of Mars in the 4th house makes you undergo quarrels with your mother, relatives and friends because of your egoistic behaviour and inadequate understanding. You will be owning houses but will never be happy and satisfied. This position will instigate greediness and you will always resonate from the space of lack. There will be no peace of mind, but your positive approach and determination will help you to overcome all hindrances.

Mars in the 4th house will also make you creative, enthusiastic and charming, which will attract the opposite sex. You will be concerned about domestic affairs and ongoing ups and downs. You will forgive others easily and never dwell in the past. You tend to develop unwanted desires, being short-tempered and because of a lack of sufficient knowledge. You do not adapt to the situation and become furious if you are in an uncomfortable zone.

4th house is a kendra house where natural malefic Mars is posited. This means you will undergo struggles from birth till the age of 25. This might create difficulty in your birthing process; parents will suffer from limited resources and earnings. You will also face uncomfortable situations due to quarrelsome parents and malnutrition. This position of Mars will also bring breaks and delays in your education and career.

A positive Mars in the 4th house will make you determined and will empower you to rise again, when you fall in life, through your hard work and strength. It is the planet of inner aggression and shows your outer personality - how you align your inner anger to achieve your targets.

A negative Mars in the 4th house will make you unfortunate and will expose you to a lot of ups and downs in all aspects of your life. Even after achieving success in your life, you will not be satisfied and content. As you will not be able to relish happiness, Mars in 4th house does not give you a contended life.

Some Notable sign placements for Mars in 4th House

Retrogression of Mars in the 4th house will destroy your happiness and your mother`s health. You will be confused about your motive and goals.

Combustion of Mars in the 4th house will make you confused about each action of yours. You would be confused about what is good for you. You will sense a boomerang effect in your life – as you sow, so you reap.