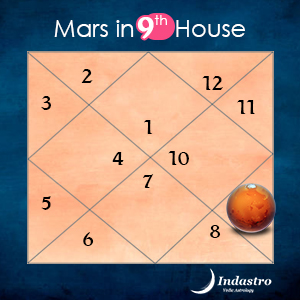 The person having Mars in 9th house is fond of travel and adventure but with it, also comes the associated danger due to Martian recklessness and desire to take risks. Such a person is quite rigid when it comes to their ideals. He or she is always ready to fight opposition concerning the religion and philosophy they follow in life. Mars’ position here also indicates that the person should be highly cautious in legal matters. Decisions should be based on rationality than emotions.

This placement of Mars also indicates foreign travel. There is a possibility for the native to get good higher education too. In some cases, Mars also boosts one’s need for independence. Sometimes, the person touches extremes regarding their religion or beliefs. There is a tendency to cross the line between following and worshiping ideas. They tend to believe that only they are right and disregard others’ opinions. Such people often indulge in discords with their in-laws, especially male.