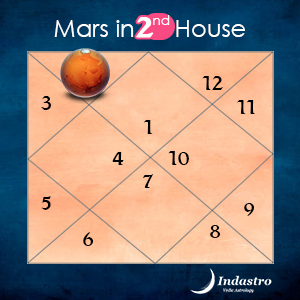 The second house is the house of wealth, initial education and family.

Mars in the 2nd House gives you an attitude to accumulate wealth and possessions by hook or by crook. This position of Mars has Mangal dosh and is bad for family harmony and will affect the longevity of marriage. It suggests separation from spouse and second marriage. It will also make you susceptible to eye diseases, injury, toothache, and accidents.

You will also exhibit high zeal and harsh speech, besides difficulty in uttering words. You will make friends easily with malicious and evil-minded people, who will distract you and create a blockage in your logical mind.

However, good lordships will bring success through enterprise, legacies and inheritance.

In the field of education, Mars positioned in the 2nd house means breaks, delays and constant change.

The second house is also a panaphar house, which represents a struggling phase for 25-50 years. Mars being a natural malefic planet will entangle you in the search for desirable earnings. You will not receive due rewards and return for your efforts. You may experience frequent disputes in domestic life due to your aggression and high expectations from others. You will face difficulty in having a child; and sometimes, with this placement, the birth of a child brings loss of job or destruction of business.

You will be fond of pungent and high calorie food, which can create acidity and indigestion problems.

The second house being the house of common sense and memory can impact your profession in an impulsive way. Mars will also render you difficult to forgive and forget, cunning and venomous.

This placement also makes you rigid and stubborn in planning; and makes you have high expectations from your loved ones – you would want them to act your way. This attitude will bring disharmony to your relationships.

You will sense a strong attraction towards the opposite sex and can go against social norms. If you do not direct the high energy well, it can create destruction in all areas of your life.

Mars posited in the 2nd house will enhance your professional network, which will widen your business. It will make you pro-active and bring you creative ideas to earn through multiple sources. The Zodiac sign, exact degree, conjunction, and influences other planets have on your Mars determine a positive polarity of Mars.

A negative Mars in the 2nd house makes you aggressive and triggers your anger to pick up fights with family members and loved ones. You will be deprived of their love and warmth as you will be cunning towards them. You will also struggle in accumulating wealth as Mars is your outer personality, which will reflect as greediness towards materialistic gain.

Some notable sign placements for Mars in 2nd House

It will make you a lone ranger as you will not be able to build harmonious relationship with anyone. You will be blunt and ruthless in your speech.

This will make you dishonest and untrustworthy, which can bring you humiliation in various area of life. You will not be given respect by your family members and loved ones.