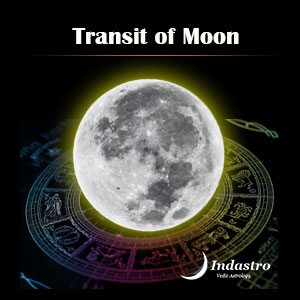 Transit Moon brings positive results when it moves into 1st, 3rd, 6th, 10th and 11th house from where natal Moon is positioned in a birth chart. In the remaining houses, it brings some challenges in life. Moon completes one circle of the zodiac is 28 days, which means that it spends around 2.5 days in one sign. Moon relates to mind and emotions. Its quick motion explains the fluctuations in our daily temperament and feelings. Here is how Moon affects you while transiting through different houses in the chart.

If Moon transits to the first house from the natal Moon, native remains happy and satisfied. Some wealth gain is also possible until the duration of the transit. This is a positive period as native’s efforts bring positive reward and emotional satisfaction. Love is in the air too during this time so you could expect a lot of romance. You also get a lot of respect and recognition from friends and relatives. Health also remains on track during this time. Good marriage prospects also form depending upon other planets and Dasas.

When Moon transits to the second house from where natal Moon is positioned in a birth chart, native experiences some unhappiness in life. Colleagues do not render much support during this period. You should also refrain from picking fights and starting arguments. Your social life is not that inspiring either. A sense of frustration pervades your thoughts. Some eye related problems also crop up. You may also face some financial hiccups too. This is not the best time to travel either.

Moon in third house from natal Moon gives you courage to topple enemies. You tend to remain happy and satisfied during this period. This is also a period of improvement in health and relationships. Friends, relatives and siblings support you throughout. You can also expect a reward from boss. Your relationship with spouse also remains cordial during this time. This is an opportune time to plan short distance travel.

Moon’s transit in fourth house from natal Moon halters progress at the work front. You might incur a loss in investments during this time. Expenditure also shoots up considerably. It is always safe to drive carefully during this transit. Some relatives, especially from maternal side may cause you trouble. Health may also dip due to indigestion or chest related problems. You become more emotional during this time.  Money matters also require caution.

Having Moon in fifth house from natal Moon affects you intellect to some extent. Your performance at work may not meet expectations during this time, which could affect your reputation. Some stomach related problems such as indigestion or mental stress persist as well. Your deals may not turn out to be that profitable and you might feel a lack of guidance in career matters.

When Moon moves into the sixth house from natal Moon, it gives good results. Native achieves success and fame during this time. You remain happy and at peace in your domestic life. However, some involvement with opposite sex could get you into trouble too. While health remains stable, expenditure trends may fluctuate. This is a good time to defeat your enemies and competitors. Investments also turn out to be profitable during this period. You enjoy your time with partner too.

Moon in seventh house from natal Moon brings foreign deals and profits from foreign associations. Love and romance increase in life. You enjoy a healthy and happy relationship with spouse. Income also shoots up in this time. Your social life improves too and the number of friends of opposite gender increase. You also achieve success in endeavors and partner is very encouraging of your efforts too. This is a good time to travel as well.

When Moon moves into your eighth house from where natal Moon is positioned, you begin to face health issues. You should also avoid any arguments until Moon is in this position. Some depression and stress prevails. You might face some unnecessary fears and anxiety too. The feeling of loneliness keeps you troubled. Your wealth graph sees fluctuations. You should also avoid travels and careless driving as possibility of accident could form. This period also brings obstacles in career.

If Moon is posited in ninth house from natal Moon, your progress at work slows down. You work very hard, but due to some issues, your reputation suffers. You might develop some disagreement or dispute with father too during this period. Body pain also keeps you troubled, especially in hips, thighs, and legs.  You might indulge in some charity work or go for a religious trip. Some challenges at work also prevail during this period.

When Moon moves to the tenth house from where natal Moon is positioned, it brings a rise in career. You might land a promotion during this time. Boss begins to appreciate your work too. This is also a good period to start a business. Some lucrative business or professional trips also take place during this period. Your feel very energetic and blessed. Family and friends also render full support. You may also get some recognition from government during this time. Overall, this is a good period for wealth accumulation and fame.

When moon is posited in the eleventh house from natal Moon, your income begins to increase. This transit also brings a pay hike for some. Business also yields profits. Native enjoys a very good time with friends and company. Your mind remains quite stable too. You get a new energy and courage to bring down enemies and achieve success in your accomplishments. Women contribute a lot to your success during this time.

If Moon transits to the twelfth house from where natal Moon is positioned in a horoscope, it makes the native vulnerable to stress and health issues. Some tensions, headache and eye related problems persist during this period. Relationship with spouse also remains turbulent due to frequent clashes. Expenditure also increases during this period so you should try to keep a balance. Your respect and reputation could also suffer during this time. You should stay away from any shady or illegal activities to get through with this transit without much damage.

Relationship between the Moon’s Phases and Fertility

The beginning of a new life starts with the different phases of the Moon. The fertility chances will be at its peak

The Moon and its Relation to Your Sex Life

The Moon’s influence on human moods, feelings, and emotions has been a matter of fascination...

Moon is your inner personality. Moon denotes your emotions and expressions and thus plays key role in romantic

Result of Moon in 12 houses