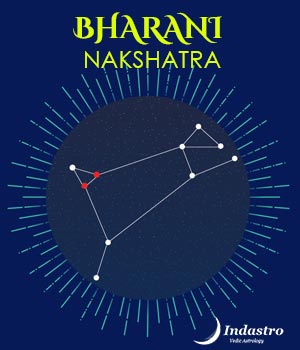 The Bharani Nakshatra is the second among the lunar constellations or Nakshatras in Vedic Astrology. The star constellation Bharani is considered to contain an enormous amount of fire energy. The natives born under this star are regarded as those who would possess a tremendous amount of energy to rule, as their potential would be very high. Among the Nakshatras, Bharani is the one that is the foundation of the Venusian Energy, explores various directions, and giving occult knowledge.

The characteristics of the Bharani Nakshatra

The main symbol of this Nakshatra is the Yoni or female sexual organ, which signifies creativity, sexuality, and the cycle of birth and death. The Bharani individuals possess a very strong character, and can withhold the transformations that life presents to them. They also have a sense of responsibility and a great amount of endurance within them. The general characteristics that they would possess are being capable, honest, driven, and successful in their work and profession, apart from generally being a happy soul.

Those who are born under the Bharani Nakshatra have a unique energy within themselves that help them inculcate the potential to rule their fire-burning energy. The exploring Bharanis have a nature that might either incline them even towards the sinful. They have this trend of oscillating between opposite ends of a spectrum, and have the ability to nurture growth and the power to manifest things quickly. The main symbol, which is the ‘yoni’ or sexual organ, signifies sexuality, and creativity, through the cycle of life and death. The natives born under Bharani would have Venusian Energy and thus gain much Occult knowledge. These natives also are one of the most energetic among all, and their enthusiasm might at times be challenging for others to understand.

The Bharani Nakshatra comes under the Aries Zodiac sign. In Aries, it comes with all its four Padas/quarters, and thereby its characteristics are very evident in an Aries native.

To know which Nakshatra you have been born into, sign up so that you can it out, and then go through the descriptive details, to know yourself better.

Know in detail about Bharani Nakshatra:

This table will help you know about the Bharani Nakshtra’s overall characteristics in brief, for your reference. Each of the Nakshatras is also divided into Four Quarters or Padas that let us know the in-depth characteristics of the person born under it, thus maintaining the uniqueness and diversity.

The Graha Devta gives the ability to understand the nature of the ruling planet, so that we can work based on the ruling planets and their placements in our chart. As per Vedic Astrology, Venus has the ownership on the Bharani constellation. ‘Bharani’ is the one who bears the responsibility to give transformation. People born under this constellation have the ability to make things alive and working again. It is said that Venus has the boon of “Mrit-Sanjeevani Vidya” from Lord Shiva. The people born in the Bharani Nakshatra will bear pain in life and transform that pain into a boon in their life, and teach others the same. They know how to mould pain in a way that is helpful to them. The creative ability of Venus in Bharani will give the power to rejuvenate any work or project that might have been stuck in the middle, and gives an abundance of success and wealth gains to the native.

The Adhi Devta is the one who gives mental clarity about the ruling planet. Through them, we can come in contact with the energy source related to that ruling planet. Yama “The Dharmraj” , is one of the most important guardians of direction in life, and also known for his strict discipline. The natives born in Bharani Nakshatra follow hard to follow rules and maintain a strict discipline in their lives to get success. Yama is the Adhi Devta, so the native will not be attached to anything that creates an obstruction in his path, whether it related to his personal life or not. A career in the Army, Police, Medicine, or an authoritative position, will be good for the Bharani Nakshatra natives.

It represents which diseases could affect the native. Pitta represents the metabolism in the body. Based on the Bharani Nakshatra, Pitta has the same characteristics as the transformation of food and water into energy, through digestion. The Bharani Nakshatra native would be aggressive by nature, which can be harmful to their own selves, and thereby, cold foods like fruits and yogurts, will be good for them.

As per Vedic culture, there are three Gunas - Sattwa, Rajas, and Tamas, which are the three processes to make life successful. “Bharani Nakshatra” has the Rajas guna that gives the native luxurious life and King like personality. All sorts of comforts will be with the native where ever he will go.

Bharani Nakshatra with its earthy elements gives the ability to bear, and rejuvenation power just like the Earth. Natives born in this Nakshatra have the magical ability to project things into life, which are generally rejected by others.

Birds are highly spiritual creatures, and they come into our lives to give us secret messages that the Universe indirectly sends us. Each Nakshatra has a particular bird symbol which signifies that its energy would be residing within us, as per our constellation/Nakshatra.

At times, it is necessary that we change our perspective, to see new insights. Such is the case when we look at the Crow as the most intelligent bird, and not as an omen, for a little change in life and for new beginnings. A native of the Bharani Nakshatra has the ability to see beyond the normal human thoughts, and help make things happen magically. A Crow never gives up easily and tries hard to achieve its target, whatever it be. In the same way, a Bharani Nakshatra born native will be hardworking, and achieve great success in their lives.

Just like the classical Raga, the first letter of the name is believed to be very important as per Vedic Astrology, also produces a vibration that is connected with the native. The first letter or sound can be predicted through Vedic Astrology, and giving the baby a name in this way, would create harmony between the human and the Universe. This would help a native will get every happiness and success, which is promised as per his or her birth chart. It is akin to coming within the network coverage area of the Nakshatra they are born in, and thus being able to get proper signals. The sounds and letters Lee, Lu, Le, and Lo are best fitted for a Bharani Nakshatra native.

Tree-related to this Nakshatra:

The tree related to this Nakshatra is the Amla tree or the Phyllanthus Emblica as its scientific Botanical Name. It would be helpful in any kind of digestive problems, that might be faced by a native of the Nakshatra.

What are the negative traits of Taurus Moon Sign...

What does it mean to have Moon in Taurus? How it makes you different person...

Taurus is ruled by Venus, and both Saturn and Venus share a friendly bond but this do...