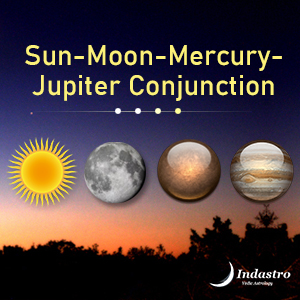 This is an auspicious conjunction since all the four planets are benefic in nature (unless it is not afflicted). When these four planets are conjunct in a house, the native often enjoys a lot of wealth and sound health. Such a person is physically stern, and virtuous in moral sense. Moreover, native having this conjunction also tend to be good-looking. When it comes to their physical charm, their eyes are usually their USP. They may also be inclined towards fields such as sculpting and metalwork.

Such people are also intelligent and wise. They have a confident persona and fearless attitude in life. Lady luck always showers her blessings upon them. They tend to earn a lot of acclaim and respect in society. The conjunction of Sun, Moon, Mercury and Jupiter also awards the native with expertise in many art forms such as acting and music.