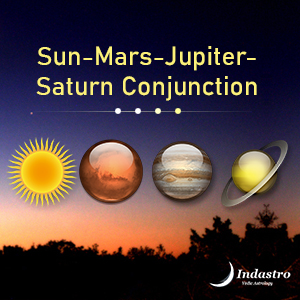 This conjunction of planets makes the native quite popular among his or her social circle. Such a person enjoys a lot of attention among their peers. Moreover, they enjoy the grace of government and people of eminent rank. These people maintain cordiality in their relationship with relatives. Their social circle is quite large.

These are the people who never stray from fulfilling their promises. Breaking commitments is strongly against their values.  Once they start off a task, they only relax after wrapping it up. While this conjunction of Sun, Mars, Jupiter and Saturn is very positive otherwise, it can make the person suffer from mental or psychological disorders, thus considered an average combination of planets in a house in astrology.