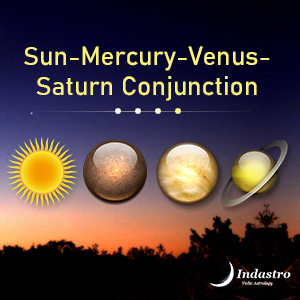 Such people are quite cheerful and energetic, with a higher-than-average sense of enthusiasm and charisma. Their expression is quite clear-cut, which if used constructively can make them great critics. They tend to be persuasive thus can be influential speakers many a times. These people generally get acclaim away from their native place, often in a foreign land. Luck always seems to be on their side.

People Sun conjunct with Mercury, Venus and Saturn in a house are also virtuous and spiritual beings. Such individuals are physically attractive, intellectually astute and morally truthful and loyal. These natives are also easygoing, comfortable and very supportive to friends. They get attracted towards opposite sex, but face issues in progeny matters despite having more than one marriage.