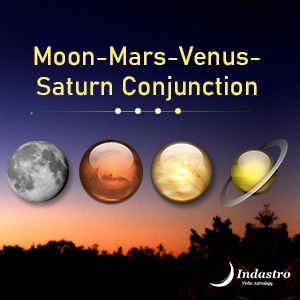 Should these cosmic bodies be in conjunction at the time of birth, their collective energy awards the person with a lot of wealth. Such a person enjoys the first few years of live in comfort. However, the later part can be full of hurdles. These natives are usually very emotional, thus get caught up in the storm of feelings.

When posited together in a house, these four planets may give the native an immoral spouse too. Moreover, such a person leads a life full of miseries in the later part. They are however courageous and daring enough to fight the challenges of life head on. Some tend to have Reptilian eyes, like that of a snake.