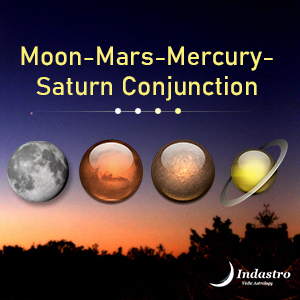 People having this conjunction are fearless and mentally sharp. Their high level of intellect and intelligence helps them march ahead in life confidently. They tend to be quite sociable in nature too, thus have many friends to keep company. They also have a lot of kids after marriage and often marry more than once.

However, this conjunction also causes loss of parents quite early in childhood and the person is sometimes adopted by others. Such a person is likely to belong to an unfamiliar heritage or family. Moreover, they also suffer defame and humiliation in life. A conjunction of Moon, Mars, Mercury and Saturn is thus usually not much favorable for a native.