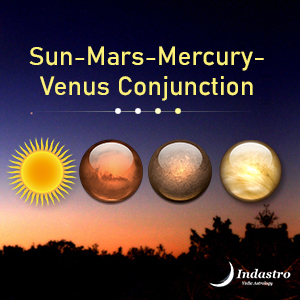 This is an inauspicious combination for a horoscope. People under the effect of this four planets conjunction are usually intelligent. However, they tend to use their cleverness for their own advantage and fail to put it to a constructive use. Their look and dressing sense is marked by a certain eccentricity. They also turn adulterous in their relationships. They prefer to be sinfully dignified than deceitfully moral. Nevertheless, others do not admire their barefaced attitude and lack of moral sense.

These natives tend to be confrontational in nature and pick up fights quite often. They are quick to voice their opinions, often uninvitingly. They also have company of bad influences. These natives have a tendency to lose their inheritance or destroy national property. Nevertheless, this conjunction gives the person immense energy and if it is used constructively, life could be much better for the native.