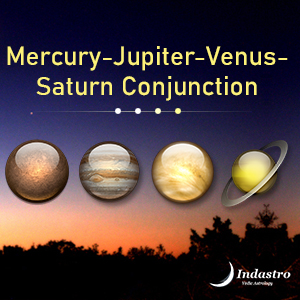 This combination includes three friendly planets - Mercury, Venus and Saturn. Jupiter is inimical towards Mercury and Venus but neutral towards Saturn. This is again a positive combination. A conjunction of these four planets in a horoscope blesses the native with higher-than-average intellect. Such people have an extraordinary memory and are sharp-minded. They are quite obedient and disciplined in nature too.

To add to the list, they are sociably admirable and usually involved in aesthetic pleasures.  Some are also inclined and adept in ancient scriptures. Such people also become well versed in fields such as astrology or politics. They may also get benefit from agriculture. Nevertheless, these natives tend to be candid in nature, say what is in their heart without giving it a second thought.