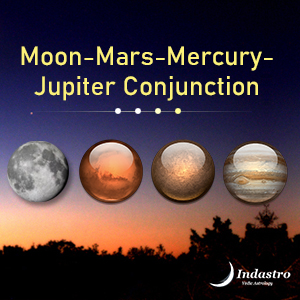 People having such a conjunction in their horoscope are spiritually inclined. They have great command over Holy Scriptures. Their inclination towards occult subjects and astrology is quiet strong. Their intelligence level is above average. Such natives enjoy a superior position in society, in government or ministry. Moreover, they get a lot of acclaim and recognition in life, thus enjoy an enviable social reputation. But despite all the name and fame, these native struggle financially.

While they do not show much interest in worldly matters, sometimes however they keep a secret relationship with a partner they cannot marry due to social constraints. A conjunction of Moon, Mars, Mercury and Jupiter endows the person with fame and position but the person struggles to have personal fulfillment, thus it is not considered a much favorable position of planets.