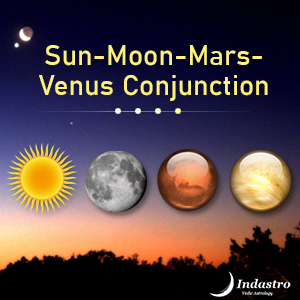 When the feminine Moon and Venus sit together with the masculine Mars and Sun, the native is usually intelligent. People with this conjunction are strong, determined and bear a good character. They usually lead a comfortable life. They may marry a virtuous spouse. Moreover, they will be blessed with children too. This conjunction also gives the native a lot of acclaim in life, together with a satisfactory financial position.

Nevertheless, these planets together also make the person wicked and harsh. The person may have to undergo punishment by government or law. The combination also affects one’s marriage. Such a native is likely to marry more than once and affairs out of wedlock are also possible. Since the conjunction brings both positive as well as negative results, it is considered an average combination in Vedic astrology.