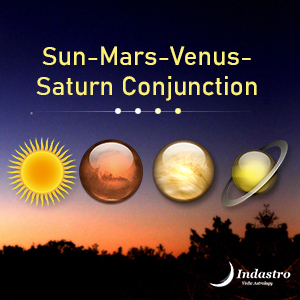 Moon is a feminine while Sun and Mars are two masculine planets in this conjunction but all three are friends with each other. However, since Saturn is sitting with three enemy planets, it strongly affects the happiness prospects of the person since other three are under affliction. Native having this conjunction is likely to enjoy a lot of wealth and affluence in life. These people do very well financially but quite conversely, they lack in intelligence.

These individuals are physically unattractive and morally off beam. They tend to follow the wrong direction in life and indulge in illicit activities. Due to inimical relationship with relatives, they tend to face a lot of mental anguish and unrest. They can be mean in nature and do not see the bigger picture and believe in immediate gratification. Moreover, this conjunction also makes them inopportune for their parents and brothers. Overall, the combination is considered unfavorable for a native.