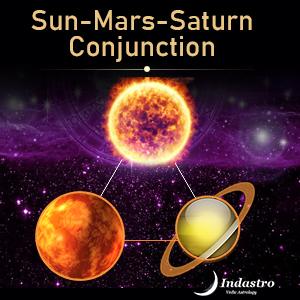 This is a conjunction of three malefic planets thus apparently quite detrimental to one’s success. This is not considered an auspicious three planets conjunction in Vedic astrology as here Sun and Mars are under the malefic influence of Saturn, which is their mutual enemy. A conjunction of Sun, Mars and Saturn results in failures for the native. Such a person struggles with endless challenges in life and success is either denied or delayed. For the most part, they have to remain in a miserable state.

These natives never enjoy the comfort and warmth of a healthy father-son relationship. Moreover, they are also prone to bodily dysfunction or deformity. They can be too confrontational in nature at times. Moreover, they lack wisdom and sense of righteousness. Such a person usually depart life away from their native place, usually due to some mishap involving fire, weapon, jail or poison.